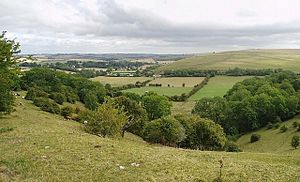 Looking towards Bowerchalke from Woodminton Down

Bowerchalke Downs (also known as Woodminton, Marleycombe Down and Knowle Down), is a 128.6 hectare biological Site of Special Scientific Interest in Wiltshire, notified in 1971. The downs encompass the entire southern outlook of the village of Bowerchalke in the Salisbury district of Wiltshire, England, and are adjacent to both the Hampshire and Dorset county boundaries. The Bowerchalke Downs are located within the Cranborne Chase and West Wiltshire Downs Area of Outstanding Natural Beauty and are part of the Southern England Chalk Formation.

The English Nature citation from 1971 states that:

"This site is an extensive area of floristically rich chalk grassland, a habitat which has become increasingly scarce due to agricultural intensification. It lies along an escarpment of the Middle Chalk overlooking the Ebble Valley in South Wiltshire and has slopes of several aspects. Present on the site are plant and animal species with a nationally restricted distribution."

"There is, however, much variety within the vegetation and several species that are generally scattered in the turf such as glaucous sedge Carex flacca, spring-sedge Carex caryophyllea, wild carrot Daucus carota and kidney vetch Anthyllis vulneraria show localised abundance."

"Scrub is scattered on some of the slopes becoming dense in one or two places. There is a diversity of shrub and tree species; hawthorn, blackthorn, wayfaring tree, gorse, whitebeam, hazel and ash."

"Anthills produced by the yellow meadow ant Lasius flavus are a feature of several slopes. The grassland supports a variety of butterfly species including dingy skipper, dark green fritillary and common blue. The adonis blue is also found where its larval food plant, horseshoe vetch Hippocrepis comosa grows in favourable conditions. In Britain this butterfly is confined to a limited number of chalk and limestone grassland sites in the south."

"Birds typical of this habitat include skylark, corn bunting, yellowhammer and grey partridge. Both green and great spotted woodpecker visit the site to feed and buzzard and kestrel hunt the area."

All content from Kiddle encyclopedia articles (including the article images and facts) can be freely used under Attribution-ShareAlike license, unless stated otherwise. Cite this article:
Bowerchalke Downs Facts for Kids. Kiddle Encyclopedia.