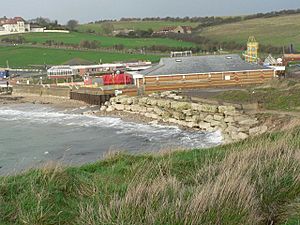 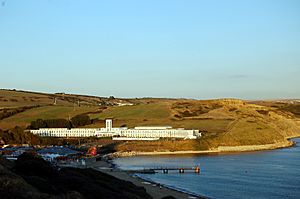 The cove from the top of Furzy Cliff, showing the Riviera Hotel. 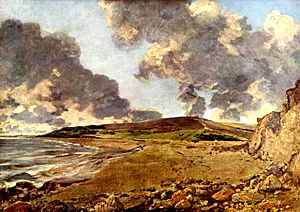 Bowleaze Cove is a small sand and shingle beach, near the village of Preston, just to the northeast of Weymouth, Dorset, England. The cove is on the Jurassic Coast and is known for its geology. Just to the west is Furzy Cliff.

The beach is made up of mainly shingle and shell with some sandy areas. A small pier divides the beach near the River Jordan outflow. The remains of Jordan Hill Roman Temple are located on Jordan Hill, leading down to Bowleaze. The hill figure of the Osmington White Horse can be seen.

In 1816–17, the artist John Constable painted Weymouth Bay: Bowleaze Cove and Jordon Hill while on his honeymoon. The painting is now in the National Gallery, London.

The Riviera Hotel, a Grade II listed Spanish-style 1930s building is on the cove.

The Fantasy Island Funfair is there.

All content from Kiddle encyclopedia articles (including the article images and facts) can be freely used under Attribution-ShareAlike license, unless stated otherwise. Cite this article:
Bowleaze Cove Facts for Kids. Kiddle Encyclopedia.