Boyagin Rock is located 10 km (6.2 mi) south west of Brookton and 26 km (16 mi) north west of Pingelly in the Wheatbelt region of Western Australia, which is approximately 175 km (109 mi) south east of Perth. The Boyagin Rock outcrop rises 50 m (160 ft) above the surrounding land and is an crestal area of a granite inselberg within the geological Yilgarn Craton framework. The Boyagin Rock Nature Reserve that contains Boyagin Rock, is widely recognised as one of the few areas of original fauna and flora still intact on the Wheatbelt. It provides refuge for a variety of fauna including numbats, goannas, echidnas and Tammar wallabies. 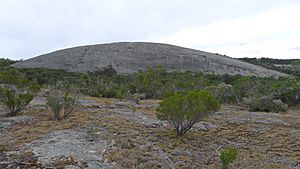 Boyagin Rock is known to the Noongar as "Boogin" and according to the Balardong Noongar it is a site of significance. A traditional story of how the rock came to be is from Noongar Elder Janet Collard who said that her husband (Andy Collard) told the story of how a big Wagyl (dreamtime water snake) wound itself round and round to form the rock, and is the last resting place of the Wagyl. Elder Cliff Humphries also spoke of the Wagyl who would during the time of creation travel from places including Boyagin Rock.

Len Collard, through his research with elders of the area, was told calling out the name of the Wagyl at this location will bring the rains. Another belief is that if you walk to the top of the outcrop without stopping you will have a long life.

All content from Kiddle encyclopedia articles (including the article images and facts) can be freely used under Attribution-ShareAlike license, unless stated otherwise. Cite this article:
Boyagin Rock Facts for Kids. Kiddle Encyclopedia.