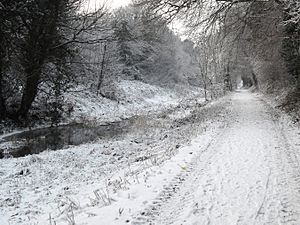 The Boyne Navigation about 3km from Navan, Co. Meath

The Boyne Navigation (Irish: Loingseoireachta na Bóinne) is a series of canals running 31 km (19 mi) roughly parallel to the River Boyne from Oldbridge to Navan in County Meath, in Ireland. The navigation was once used by horse-drawn boats travelling between Navan, Slane and the port of Drogheda; however is now derelict. The Boyne Navigation branch of the Inland Waterways Association of Ireland have an agreement with An Taisce – The National Trust for Ireland giving it a license to carry out restoration work on the navigation to return it to a usable waterway. 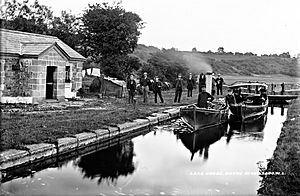 The designers intended that the navigation continue upstream along the Boyne to Trim where it could connect with the Royal Canal. The section from Navan to Trim was never built, and the Boyne Navigation remains disconnected from other inland waterways in Ireland. The Boyne Navigation Company began work on the lower section of the navigation from the sea lock at Oldbridge to Slane in 1748 and was completed in the 1760s. The upper section from Slane to Navan was completed in 1800. The main cargo on the navigation was grain and flour between the mills on the river and the port of Drogheda and coal in the other direction. At four places along the route the towpath switches from one side of the river to the other. Where this happened the horse would step onto the barge while it was poled across to the other side.

David Jebb was the engineer in charge of the construction. Jebb himself built a flour mill at Slane in 1766 to take advantage of the navigation that he had recently completed that far. When opened it was the largest mill of its kind in Ireland.

A traditional craft used by people on the Boyne was the Boyne cóireáil (circular currachs). A group called the Boyne Currach Heritage Group was founded in 1997 to build replicas of the original currachs.

The navigation was never a commercial success, however it did expand the local economy by making it easier to transport agricultural goods from inland County Meath to market. The total cost to build the navigation was £190,000 (in pounds sterling) of which £30,000 was private contributions the remainder being public funds. In the financial year ending in April 1844 income for the navigation was £734.12s.4d. and expenses were £460.6s.9d (both in pounds, shillings and pence).

The canal passed into private ownership in 1915 and over the next ten years fell into disrepair. An Taisce purchased the navigation rights to the canal from the Navan baker John Spicer & Co. for one Irish pound in 1969. An Taisce also own most of the towpaths and adjoining lands however there is no public access on a section of the Lower Navigation from Rosnaree Lock to Roughgrange. A number of sections of the towpath are maintained as walking paths, particularly the section from Stackallan Bridge to Navan. Metges Lock [Navan] and weir were removed in the 1980 by the OPW as part of a flood relief scheme. Voluntary restoration efforts have mostly been concentrated on the first section of navigation, from the Sealock (Lock 1) to the Guardlock (Lock 2) at Oldbridge (Oldbridge section). The Oldbridge section has reinstated Lockgates. Lockgates for Lock 1 were hand built on the towpath/ grass verge to this lock, of the course of about 4 years. Lockgates for Lock 2 were contracted out to a local joiner (Michael Black, Drogheda). They were installed over he course of a week during May 2017. A silt harbour was also reinstated above Lock 2. Lock 3 was dredged during Summer 2018. Lockgates were been fabricated between the end of 2018 and early 2019. Basic gates were installed at it back in May 2019. The Boyne Navigation section of I.W.A.I. spent the rest of 2019 and early 2020 fitting additional parts to these lockgates to make them functional. Work has been suspended due to the covid-19 illness.

A subgroup of The Boyne Navigation section of I.W.A.I. has been established back in roughly 2018. They work on the Navan section of the Boyne Navigation. The carry out work days ever Monday except bank holidays. Their work can be followed on. They have been involved in maintaining the grounds of Lock 17, clearance of fallen trees, maintenance of growth along the Navan section.

The Oldbridge section is now managed for navigation. The gates at Lock 2 are closed during the Winter (river flooding periods of the year) and can opened during the summer (times of low River Boyne levels). Small boats can effectively travel from Drogheda up as far as Staleen Lock (lock 3). When complete, this will allow passage of boats from Drogheda as far upstream as Staleen Lock. The Staleen section actually passes Newgrange.

The announcement of a public mooring at Scotch Hall shopping centre in Drogheda will complement the Boyne Navigation. A grant has been awarded for the construction for the public moorings, as per announcement on local Councillor's (Frank Godfrey's) Facebook page. The mooring is not due to go ahead as funding was around €100,000 but the cheapest quote was around €400,000.

A local Community employment group working under IWAI's Boyne Navigation Branch is currently undertaking works on the Slane section of the navigation. Recent works which have taken place include: removal of thick vegetation growth on the waterway section (during Summer 2014) between Slane Lock (Lock 9) to a little beyond the Bridge that crosses the Boyne Navigation and River Boyne leading to Slane. Sluices were installed in the concrete barriers at Locks 8 and 9 at this section to allow for the rewatering of the waterway section and also allow for the regulation water levels. Once or were funding sourced, it would be hoped for the installation of lockgates at Lock 8 (Morgan's Lock) and Lock 9 (Slane Weir) allowing boat passage from the River Boyne to the other using the Boyne Navigation. A boat would do this by entering the double lock chamber at Lock 8 under the engineering feat of the man-made archway (locally known as the Scabby Arch) under the stone arch road bridge to Slane up to Lock 9 and back out onto the River Boyne.

A local group have established a workgroup to maintain and upkeep the Staleen Guard Lock walkway/ towpath section, between the River Boyne and back down to the Drogheda Waterworks.

After the commercial feasibility of using the waterway for ferrying trade goods was made redundant with the advent of the train. The Boyne Navigation attracted tourists and tour boats to run trips on its waters. At least two tour boats were known to have operated on the navigation one by the name of Ros na Righ. One of these boats' journeys functioned by having a leading boat with an end, which dragged a boat behind it with its paying travellers.

In the 21st century, tour boat activity has been reestablished on the Oldbridge section. One company offering trips is called Boyne Boats. They have been operating for about the last two years. Tourists are offered a trip through the history of the Boyne Valley, while paddling a traditional Irish boat (currach) called a naomhóg along the Boyne Navigation - Oldbridge section. This company has offered boat trips above Lock 2 and Lock 8 on the River Boyne, opposite Slane Castle.

A cycle track and walkway (known as the Boyne Greenway/ Boyneside Trail) has been developed along the Oldbridge section of the navigation. It runs between Pass (townsland on the exact border between Meath and Louth to opposite) the entrance of the Battle of the Boyne Centre.

Walkways in the area include routes from:

All content from Kiddle encyclopedia articles (including the article images and facts) can be freely used under Attribution-ShareAlike license, unless stated otherwise. Cite this article:
Boyne Navigation Facts for Kids. Kiddle Encyclopedia.