The Bozeman National Fish Hatchery was authorized by an act of the United States Congress on August 5, 1892. The initial purchase of land for the hatchery was on May 20, 1893, and consisted of 50.3 acres (20.4 ha) at the entrance to Bridger Canyon. Construction of facilities began April 1895 and was completed in late 1896. The first superintendent, Dr. James A. Henshall, began working there on January 11, 1897. The hatchery's original focus was on brook trout and rainbow trout (steelhead). The hatchery grew steadily and an additional 80 acres (32 ha) were purchased in 1905. The fish hatchery focus ceased in 1966 when the hatchery became a Fish Cultural Development Center with a focus on improving Salmonidae culture. The focus changed again to cover a wider variety of fish species when it became a Fish Technology Center in 1983. Today, the center is more of a research and education center than a hatchery. 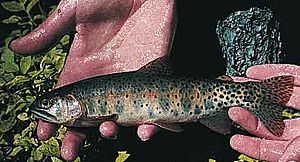 A significant accomplishment of the center was its instrumental role in getting the greenback cutthroat trout's rating under the Endangered Species Act changed from extinct to threatened. In August 2004 a new 16,500 square feet (1,530 m2) laboratory and administrative building known as the Robert G. Piper Building was opened, named in honor of a former director of the center. The Bozeman Fish Technology Center currently studies aquatic species culture, aquatic species nutrition, fishery evaluation, and aquatic species health in the states of Montana, North Dakota, South Dakota, Wyoming, Nebraska, Utah, Colorado, and Kansas.

All content from Kiddle encyclopedia articles (including the article images and facts) can be freely used under Attribution-ShareAlike license, unless stated otherwise. Cite this article:
Bozeman National Fish Hatchery Facts for Kids. Kiddle Encyclopedia.