Brandon Bollig (born January 31, 1987, in Saint Charles, Missouri) is an American ice hockey center. He currently plays for the Calgary Flames of the National Hockey League (NHL). He has also played for the Chicago Blackhawks. 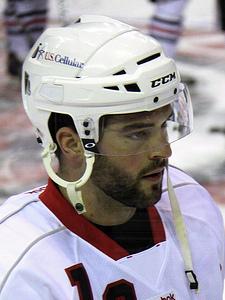 Bollig with the IceHogs.

He was not drafted by a team but the Blackhawks signed Bollig to a two-year entry-level contract and put him on their AHL farm team, the Rockford IceHogs. He played 2 seasons with the IceHogs and was called up to the Blackhawks on February 28, 2012. He scored his first NHL goal on April 14, 2012, against Mike Smith of the Phoenix Coyotes in a playoff game. Bollig also portrayed Will Cross, age 12 in the 2002 film Defiance. On June 24, 2013, He won the Stanley Cup with the Blackhawks after they defeated the Boston Bruins 4 games to 2 in the 2013 Stanley Cup Finals.

On June 28, 2014 at the 2014 NHL Entry Draft, the Blackhawks traded Bollig to the Calgary Flames in exchange for the 83rd overall pick in the draft.

All content from Kiddle encyclopedia articles (including the article images and facts) can be freely used under Attribution-ShareAlike license, unless stated otherwise. Cite this article:
Brandon Bollig Facts for Kids. Kiddle Encyclopedia.