The community is named for the nearby Brazeau Creek, which in turn was named for Joseph Brazeau (also spelled Obrazo) a merchant from St. Louis, Missouri in the years 1791-1799, or a member of his family. 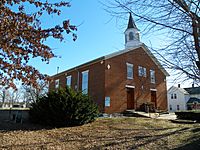 Some of the earliest Americans to put down roots in Perry County were English and Scots-Irish Presbyterian settlers from Rowan, Iredell, Cabarrus, and Mecklenburg counties in North Carolina, and they settled Brazeau in 1817. There, they opened land in the Brazeau Creek drainage basin. In 1804, Brazeau was estimated to have had 88 inhabitants. Brazeau's original log Presbyterian Church, The Evangelical Presbyterian Church of Brazeau, was established on September 2, 1819. After a fire destroyed the log church in 1832, a new frame church was built in 1833 to replace the lost structure. The brick church, which is currently still in use, was built in 1854. An academy was established in the same year until public schools became prevalent in the 1880s. The people of Brazeau were said to have helped the Saxon-Lutheran immigrants from Germany during their first hard winter of 1839, who otherwise may have starved. The Brazeau Post Office operated from 1879 until its closing in 2011. The small town once boasted a general store, a bank, and a John-Deer dealership.

Today, the small town is home to Hemmann Winery, established in 2003, which occupies the former general store.

All content from Kiddle encyclopedia articles (including the article images and facts) can be freely used under Attribution-ShareAlike license, unless stated otherwise. Cite this article:
Brazeau, Missouri Facts for Kids. Kiddle Encyclopedia.