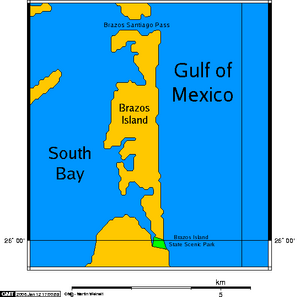 A map of Brazos Island, showing that the island's landmass is not always completely surrounded by water.

Brazos Island, also known as Brazos Santiago Island, is a barrier island on the Gulf Coast of Texas in the United States, south of the town of South Padre Island. The island is located in Cameron County.

The island is also known as Brazos Santiago Island, a reference to the port of Brazos Santiago, the first Spanish settlement on the island. Later it became the Port of Matamoros. With a draft of 31 feet, it was perhaps the best naturally occurring seaport in the Western Gulf of Mexico. No one knows who named this excellent seaport, but many think it was Alonso Alvarez de Pineda in 1519. Another says it might have been Amerigo Vespucci, some 20 years earlier than Pineda. Mystery surrounds the subject, as the existence of a natural seaport in those days would have been an important military secret. Later, in 1846, it was the first military objective of the US Navy, in support of General Zachary Taylor's invasion of Mexico. Control over this important seaport was said by Harvard historian Leroy Graf to be the primary reason for the US invasion of Mexico.

Brownsville historian A. A. Champion called it the most militarily contested real estate in all North America.

The island is the southernmost barrier island in Texas, separated from the delta landmass of the Rio Grande by unnamed channels. The island's northern end is separated from South Padre Island by the Brazos Santiago Pass. The island is oriented generally north-south, with the Gulf of Mexico on the east, and South Bay on the west. In the course of the natural processes of erosion and sedimentation, the island is not always surrounded by water, and is usually connected to the mainland.

In 1865 Union soldiers occupying the island and its strategic harbor launched the Brazos Santiago Expedition to invade Brownsville, which led to the Civil War's last battle, known as the Battle of Palmito Ranch. The Yankee's were surprised by confederate forces supplied with cannon's, said to have been borrowed from the French Army occupying Matamoros. Also rumored was support from armored French steamboats patrolling the adjacent Rio Grande river.

The island is the new location of Space X, and their new rocket launching base, currently under construction, (2016). Brazos Santiago Pass, on its north end, is the current ship channel for the Port of Brownsville. The South end is the USA-Mexican border and the Rio Grande river. Brazos Island State Scenic Park, also known as Brazos Island State Recreation Area, is located on the island. The beach at this state park is known as "Boca Chica."

All content from Kiddle encyclopedia articles (including the article images and facts) can be freely used under Attribution-ShareAlike license, unless stated otherwise. Cite this article:
Brazos Island Facts for Kids. Kiddle Encyclopedia.