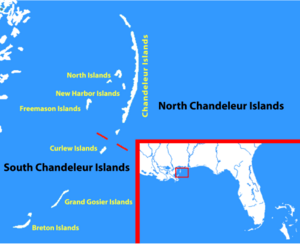 Map of the Breton and Chandeleur Sounds 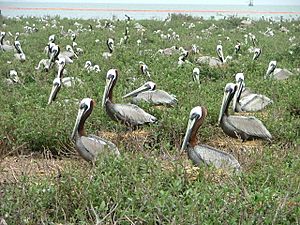 Breton Island is an island (or group of islands) in the Gulf of Mexico near the mouth of the Mississippi River and part of Plaquemines Parish, Louisiana. It is part of the Breton National Wildlife Refuge, which was established in 1904.

In the early 19th century, Breton Island comprised two islands. Prior to Hurricane Opal in 1995, it was a single island, and was divided in two by that storm. After Hurricane Georges in 1998 it was divided into three islands. Hurricane Ivan in 2004 caused additional damage to the island.

All content from Kiddle encyclopedia articles (including the article images and facts) can be freely used under Attribution-ShareAlike license, unless stated otherwise. Cite this article:
Breton Island (Louisiana) Facts for Kids. Kiddle Encyclopedia.