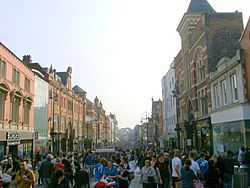 Briggate is one of the pedestrianised principal shopping streets in central Leeds, England. 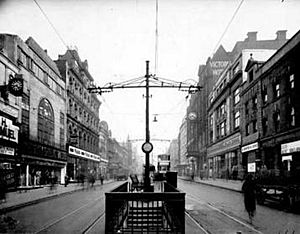 Trams on Briggate around 1950 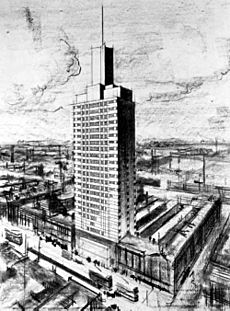 The Briggate Skyscraper plan from 1938 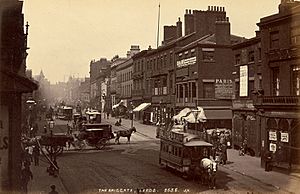 Briggate is one of the oldest streets in the city of Leeds and was made in 1207, when the road led to the north side of Leeds Bridge which crossed over the River Aire. The name 'Briggate' means 'the road to the bridge'.

The Moot Hall in the centre of Briggate, built in 1615 as a courthouse, was demolished in 1825. A statue of Queen Anne that decorated its front is in the entrance hall of Leeds Art Gallery. The entrance to the churchyard of St John the Evangelist's Church, Leeds, built between 1632 and 1634, is off New Briggate and is the oldest church in the city centre.

During the English Civil War a pitched battle was fought for the control of Leeds along the length of Briggate. The Battle of Leeds on 23 January 1643 saw a Parliamentarian force under Sir Thomas Fairfax take the town from the Royalist forces of Sir William Savile. Fairfax lead his troops in an attack on a ditch and rampart the Royalists had dug running parallel to Briggate from St John's Church to the Aire, while a simultaneous attack took place on Leeds Bridge.

Louis Le Prince filmed some of the world's first moving pictures on Leeds Bridge in 1888.

Briggate was originally wide enough to host the market that later moved to Vicar Lane.

Briggate was the main north-south thoroughfare in Leeds along which the city grew. In the 20th century trams ran along the street until the 1950s when the Leeds Tramway closed. Pedestrianisation started in 1993 when only public transport vehicles were allowed to use the street, and in 1996 it was closed to all traffic. In phases from 2004 to 2006, Briggate was paved with York Stone, removing the roadway and pavements that remained.

In 1938, an art deco skyscraper was proposed but never built due to the outbreak of the Second World War. It would have been around 25 storeys high with an art deco motif on top.

Leeds is noted for its arcades on either side of Briggate. Modern arcades were built in the 1970s at the southern end of Briggate, but the arcades of architectural significance are at its northern end.

New Briggate hosts the Leeds Grand Theatre was redeveloped from 2004, to provide an enlarged home for Opera North and regenerate New Briggate. On Swan Street, is the City Varieties, one of the UK's oldest music halls. The City Varieties was granted Heritage Lottery funding for refurbishment and restoration, and closed in January 2009 and re-opened in September 2011. The site of Harvey Nichols was previously home to Frank Matcham's Empire Theatre that was demolished in the 1960s.

Briggate is known for its old yards or alleyways that branch off and house public houses such as Whitelocks that have changed little over the years, The Ship, The Packhorse and The Angel Inn. The back entrances to these alleyways were called 'low ins', or 'loins', which is where the term Loiner (a resident of Leeds) is suspected to originate from. It refers to the people who would 'hang around in the loins'. 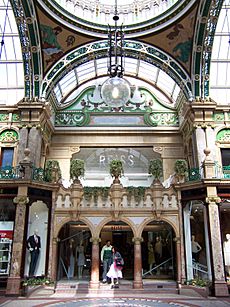 In the late 1980s and early 1990s, the run-down County and Cross Arcades, were redeveloped and Queen Victoria Street was given a glass roof to create the Victoria Quarter. It was intended to be a centre for independent retailers, but it has become a centre for designer brands.

Most of Leeds' department stores are on Briggate, including the Harvey Nichols branch and major high street retailers, banks, restaurants and cafes. There has been some residential development above the shops. The northern non-pedestrianised part of Briggate between The Headrow and Merrion Street is New Briggate and is home to some small retailers, bars, pubs, nightclubs, takeaways and the Grand Theatre. The non-pedestrianised stretch on the south side between Boar Lane and Call Lane is Lower Briggate. It was home to Dysons Chambers, restaurants, small shops, bars, pubs and a small gay enclave. In 2007, Briggate was decorated in lights to celebrate its 800th birthday.

All content from Kiddle encyclopedia articles (including the article images and facts) can be freely used under Attribution-ShareAlike license, unless stated otherwise. Cite this article:
Briggate, Leeds Facts for Kids. Kiddle Encyclopedia.