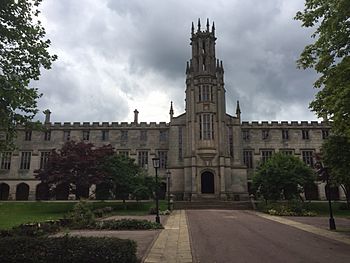 The college was built as an Independent (i.e. Congregational) college in 1840–43, the architects being Irwin and Chester. The site was in the new suburb whose development had been begun about 10 years earlier by Samuel Brooks; its name later became Whalley Range. The aim of the Lancashire Independent College was a project of the Lancashire Congregational Union to provide higher education for Non-Conformists who were excluded from the Universities of Oxford and Cambridge until 1871. This included a new college building and moving the staff from Blackburn Academy which was then closed. The three founders were George Hadfield, Thomas Raffles and William Roby (minister of the Grosvenor Street Chapel, London Road, Manchester). The Blackburn Academy arose from courses of lessons given to prospective Congregational ministers by William Roby who was supported by the Manchester merchant Robert Spear. When the principal, Joseph Fletcher, left for London the academy became the Lancashire Independent College and moved to Manchester. The college became known much later as the Northern Congregational College.

The similarity of design to an Oxbridge college is therefore easily understood. The marshy nature of the area, then called Jackson's Moss, meant that 4½ feet (135 cm) of peat had to be dug away before safe construction could begin. Nikolaus Pevsner commended the "long, very impressive, ashlar-faced, Gothic front." The wings culminate in a "tall, fanciful" tower, with a "two-storey Gothic oriel (window)." The entrance and assembly halls were re-ordered by Alfred Waterhouse in 1876–80 and Pevsner considered them "disappointing, but the rooms along the piano nobile are very charming, their Gothic fireplaces, ceilings and doorcases nicely varied."

During World War II it was used to house refugee academics, mainly from Czecho-Slovakia. The later name of the college was the Northern Congregational College, who used the premises until 1985 when they joined the Northern Baptist College in Luther King House, Brighton Grove.

The building became the national college of the GMB in the late 20th century and trained many trades-union negotiators. The GMB sold the college in 2004 as it was considered too expensive to maintain. After a period of uncertainty, the building was purchased by the British Muslim Heritage Centre to "serve as a focus for Muslim heritage and identity in Britain".

In January 2013 and 2014, the building was nominated for the Arts and Culture Awareness award at the British Muslim Awards.

Nasar Mahmood currently serves as a trustee of the centre. He was awarded an OBE in the Queen's New Year Honours List in 2019.

All content from Kiddle encyclopedia articles (including the article images and facts) can be freely used under Attribution-ShareAlike license, unless stated otherwise. Cite this article:
British Muslim Heritage Centre Facts for Kids. Kiddle Encyclopedia.