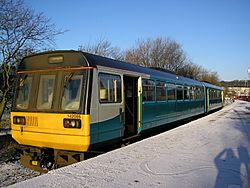 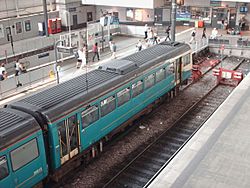 The British Rail Class 142 is a class of Pacer diesel multiple units used in the United Kingdom. 96 units were built by BREL in Derby between 1985 and 1987. They were a development of the earlier Class 141 which were introduced in 1984.

All content from Kiddle encyclopedia articles (including the article images and facts) can be freely used under Attribution-ShareAlike license, unless stated otherwise. Cite this article:
British Rail Class 142 Facts for Kids. Kiddle Encyclopedia.