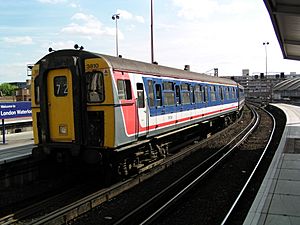 Class 423/1, no. 3810 arriving at London Waterloo on 15 August 2003. This unit was one of the last to carry Network SouthEast livery. It was nicknamed the "Great Escape" after it was exported to Germany for a while for testing.

The British Rail Class 423 (or 4Vep) electrical multiple units were built by BR at York Works from 1967 to 1974, although the MBSOs and TSOs of the first 20, 7701-7720, were constructed at Derby Works. They feature manually opening doors next to every seating row. They were mostly found working outer suburban services in South London, and rural services in Kent and Sussex, up to 2005 when they were finally replaced by Electrostar and Desiro units.

All content from Kiddle encyclopedia articles (including the article images and facts) can be freely used under Attribution-ShareAlike license, unless stated otherwise. Cite this article:
British Rail Class 423 Facts for Kids. Kiddle Encyclopedia.