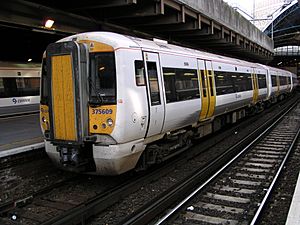 Electrostar trains are the new standard on many of London’s commuter routes. 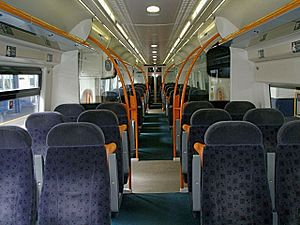 Interior of a Southeastern electrostar (Class 375).

Electrostar is the name given to a series of related electric multiple-unit passenger trains manufactured by Bombardier Transportation, formerly ADtranz. Since the privatisation of British Rail, it has become the most common new EMU type in Britain, where different variants referred to as Class 357, Class 375, Class 376, and Class 377 are most common on the high-volume commuter routes in South London and to the Sussex, Kent & South Essex coasts. It shares the same bodyshell and core structure as the Turbostar, which is in turn the most common post-privatisation diesel multiple unit family. Most of the Electrostar fleet were assembled at Bombardier’s Derby works.

All content from Kiddle encyclopedia articles (including the article images and facts) can be freely used under Attribution-ShareAlike license, unless stated otherwise. Cite this article:
Electrostar Facts for Kids. Kiddle Encyclopedia.