Kids Encyclopedia Facts
This page is about the cinemas in the district. For full coverage of Broadway including history and architecture of office and retail buildings and recent overall revitalization, see Broadway (Los Angeles).

The Broadway Theater District in the Historic Core of Downtown Los Angeles is the first and largest historic theater district listed on the National Register of Historic Places (NRHP). With twelve movie palaces located along a six-block stretch of Broadway, it is the only large concentration of movie palaces left in the United States. The same six-block stretch of Broadway, and an adjacent section of Seventh Street, was also the city's retail hub for the first half of the twentieth century, lined with large and small department stores and specialty stores.

Highest concentration of movie palaces in the world

Stretching for six blocks from Third to Ninth Streets along South Broadway in Downtown Los Angeles, the district includes 12 movie theaters built between 1910 and 1931. By 1931, the district had the highest concentration of cinemas in the world, with seating capacity for more than 15,000 patrons. Broadway was the hub of L.A.'s entertainment scene – a place where "screen goddesses and guys in fedoras rubbed elbows with Army nurses and aircraft pioneers." In 2006, the Los Angeles Times wrote:

"There was a time, long ago, when the streets of downtown Los Angeles were awash in neon—thanks to a confluence of movie theaters the world had never seen before. Dozens of theaters screened Hollywood's latest fare, played host to star-studded premieres and were filled nightly with thousands of moviegoers. In those days, before World War II, downtown L.A. was the movie capital of the world."

Columnist Jack Smith called it "the only large concentration of vintage movie theaters left in America." Smith recalled growing up a mile from Broadway and spending his Saturdays in the theaters:

"I remember walking into those opulent interiors, surrounded by the glory of the Renaissance, or the age of Baroque, and spending two or three hours in the dream world of the movies. When I came out again the sky blazed; the heat bounced off the sidewalk, traffic sounds filled the street, I was back in the hard reality of the Depression.

In the years after World War II, the district began to decline, as first-run movie-goers shifted to the movie palaces in Hollywood, in Westwood Village, and later to suburban multiplexes. After World War II, as Anglo moviegoers moved to the suburbs, many of the Broadway movie palaces became venues for Spanish-language movies and variety shows. In 1988, the Los Angeles Times noted that, without the Hispanic community, "Broadway would be dead." Jack Smith wrote that Broadway had been "rescued and revitalized" by "the Latino renaissance."

The district has been the subject of preservation and restoration efforts since the 1980s. In 1987, the Los Angeles Conservancy started a program called "Last Remaining Seats" in which the old movie palaces were opened each summer to show classic Hollywood movies. In 1994, the Conservancy's associate director, Gregg Davidson, noted: "When we started this, the naysayers said no one will go downtown to an old theater to see an old movie in the middle of the summer, but we get a number of people who have never seen a movie in a theater with a balcony. The older people (go) for nostalgia. And the movie people—seeing a classic film on a big screen is a different experience." After attending a Conservancy screening, one writer noted: "The other night I went to the movies and was transported to a world of powdered wigs and hoop skirts, a rococo fantasy of gilded cherubs and crystal chandeliers. And then the film started."

Despite preservation efforts, many of the theaters have been converted to other uses, including flea markets and churches. The Broadway movie palaces fell victim to a number of circumstances, including changing demographics and tastes, a downtown location that was perceived as dangerous at night, and high maintenance costs for aging facilities. With the closure of the State Theater in 1998, the Orpheum and the Palace were the only two still screening films.

In 2006, the Los Angeles Times wrote: "Of all of L.A.'s many hidden gems, maybe none is as sparkling nor as hidden as the Broadway theater district downtown." Bemoaning the possible loss of such gems, the same writer noted: "L.A. gave birth to the movies. To lose the astonishing nurseries where the medium grew up would be tragic."

In 2008, the City of Los Angeles launched a $40-million campaign to revitalize the Broadway district, known as the "Bringing Back Broadway" campaign. Some Latino merchants in the district expressed concern that the campaign was an effort to spread the largely Anglo gentrification taking hold in other parts of downtown to an area that has become the city's leading Latino shopping district. A worker at one of the district's bridal shops noted, "On one side, I like the idea. The only thing is that I don't think they want our types of businesses."

The twelve theaters in the Broadway District from north to south are: 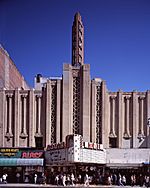 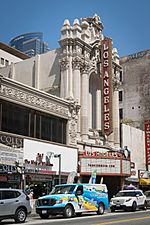 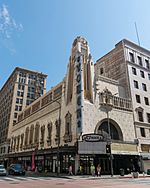 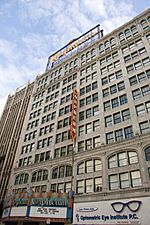 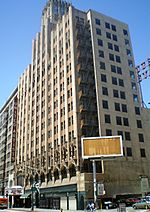 Other surviving theaters in the vicinity

Some of the demolished theaters in and adjacent to the district are:

All content from Kiddle encyclopedia articles (including the article images and facts) can be freely used under Attribution-ShareAlike license, unless stated otherwise. Cite this article:
Broadway Theater District (Los Angeles) Facts for Kids. Kiddle Encyclopedia.