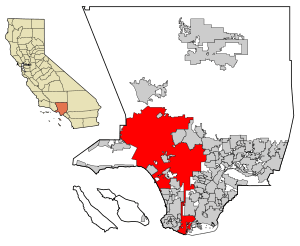 This is a list of the National Register of Historic Places listings in Los Angeles, California.

The first site in Los Angeles to be listed was the Rómulo Pico Adobe in the Mission Hills section of the city, which was listed in November 1966 at the inception of the Register. Several of the oldest historic sites are located in the Los Angeles Plaza Historical District in Downtown Los Angeles; these include the original Nuestra Señora La Reina de Los Angeles Church (1822), the Avila Adobe, Los Angeles' oldest residence (1818), Olvera Street, the Italianate style Masonic Hall (1858), and the Italian Renaissance Revival style Merced Theater (1869).

While most of the sites are office buildings or homes, two are ships, and twenty-one are current and former branches of the Los Angeles Public Library. Seven temples or churches are listed. At least five sites are related to rail transportation. Included also are four hotels, five theaters (in addition to the Broadway Theater District), four U.S. post offices, and four fire stations.

To be listed on the National Register, sites must retain their historic integrity, they usually must be 50 years old, and their listing must be promoted – or at least not opposed – by the current owner, so many historically important sites in the city are not listed. Included on the list are sites relating to the movie industry such as a former office building of the Warner Bros. studios, but no film lots or film studio buildings are listed. Despite the city's involvement in aviation history, only two sites, Hangar One and Portal of the Folded Wings, appears to relate to that. Perhaps only a Victory ship and two coastal battery sites relate to the city's military-industrial history.

The listings are distributed across many neighborhoods of Los Angeles, from San Pedro in the south to the northern reaches of Chatsworth in the San Fernando Valley, and from the Pacific Palisades on the west to Highland Park on the east. Thirty-eight are located in Downtown Los Angeles; 27 are in Hollywood, 16 are in West Adams, and 13 are in San Pedro. Reflecting the sprawl of Los Angeles, the city's northernmost historic site in Chatsworth (the Old Stagecoach Trail) is more than 55 miles (89 km) from its southernmost site in San Pedro (Point Fermin Light).

All content from Kiddle encyclopedia articles (including the article images and facts) can be freely used under Attribution-ShareAlike license, unless stated otherwise. Cite this article:
National Register of Historic Places listings in Los Angeles Facts for Kids. Kiddle Encyclopedia.