Broadway in Tucson facts for kids 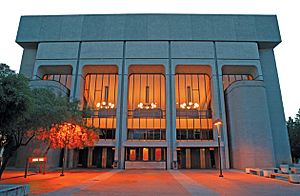 The Tucson Music Hall outside at dusk, where the performances are held.

Broadway in Tucson/A Nederlander Presentation is part of the nationally recognized Nederlander Producing Company of America. The Nederlander organization was awarded a contract by the City of Tucson in 2003 to present a series of Broadway musicals and special events downtown at the Tucson Music Hall and Leo Rich Theater, all of which are part of the Tucson Convention Center. Since 2003 Broadway In Tucson has been responsible for bringing over 25 Broadway shows to downtown Tucson.

February 18, 2010 marked the press release stating that Broadway in Tucson will be bringing the smash Broadway hit Wicked to Tucson, as a part of its 2010-2011 season. For the first time ever, a Broadway in Tucson show will be held at University of Arizona's Centennial Hall. This presentation of Wicked is co-sponsored by UApresents; subsequently this represents the first partnership between the two organizations.

All content from Kiddle encyclopedia articles (including the article images and facts) can be freely used under Attribution-ShareAlike license, unless stated otherwise. Cite this article:
Broadway in Tucson Facts for Kids. Kiddle Encyclopedia.