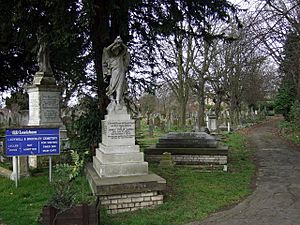 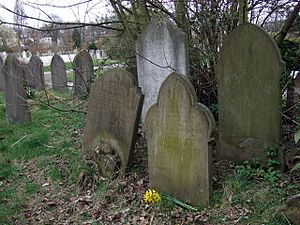 Brockley and Ladywell Cemeteries (also known as Ladywell and Brockley Cemetery) were opened within one month of each other in 1858 and are sited on adjacent plots of previously open land. The two component parts are characteristic examples of the first wave of Victorian public cemeteries and are now part of the Brockley Conservation Area.

The cemeteries occupy 37 acres (150,000 m2) of land wholly within the London Borough of Lewisham and are owned and managed by the Cemeteries and Crematorium Services of the Borough. They are also nature conservation sites of Borough Importance Grade 1 and a haven for wildlife, plants and wildflowers.

Until 1948, the two cemeteries were completely separate, being divided by a wall. Ladywell Cemetery, which was previously known as Lewisham Cemetery, stands to the east of the wall and Brockley Cemetery, formerly Deptford Cemetery, lies to the west. Both cemeteries hold a wealth of historical interest. Evidence of Deptford's seafaring past can be found in the many inscriptions and adornments on the headstones. 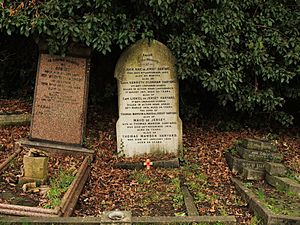 Brockley Cemetery contains 195 war graves, 175 from World War I and 19 from World War II. The majority of the graves lie in a War Plot. On the cemetery's west side, a Screen Wall memorial lists those whose graves could not be marked by headstones.

Ladywell Cemetery contains 226 war graves from World War I and 18 from World War II. A War Graves plot contains 100 graves, the names of those buried there being listed on a Screen War Memorial in Plot D, as well as those buried elsewhere in the cemetery whose graves could not be marked by headstones. The CWGC also maintain a Commemorative Plot, in Plot B, on which 46 headstones have been erected.

The Ladywell entrance to the cemetery is Grade II listed. This notes that the gates were built in 1857 to the designs of William Morphrew, for the Lewisham Burial Board. The gates are made of wrought iron, the piers of stone; square, with set back, sloping tops culminating in saddleback gables. The gates are of florid Gothic design, the monogram of the Lewisham Burial Board in the three lower hubs to each gate, with trefoil and barley sugar decoration above. The name LADYWELL CEMETERY may have been inserted, or is more likely a reworking of the original name LEWISHAM CEMETERY; the style of the lettering, however, is clearly of 1857.

All content from Kiddle encyclopedia articles (including the article images and facts) can be freely used under Attribution-ShareAlike license, unless stated otherwise. Cite this article:
Brockley and Ladywell Cemeteries Facts for Kids. Kiddle Encyclopedia.