Brooklin is a town in Hancock County, Maine, United States. The population was 824 at the 2010 census. It is home to WoodenBoat Magazine, Atlantic Boat Company, Brooklin Boat Yard, and numerous boatbuilders, artists, writers, musicians, and potters.

Brooklin was originally part of a larger town, then Sedgwick broke off and formed its own town. A few weeks later, the name was changed to Brooklin, after the brook line which separated it from Sedgwick. Using porgy oil as a fertilizer, the difficult soil was made productive, and hay became the principal crop. With excellent harbors, however, the main occupations were fishing and seafaring. By 1859, when the population was 1,002, it also had five boot and shoemaking factories, as well as two barrel manufacturers. By 1886, the town was noted for producing smoked herring in considerable quantities. Canning lobster had also become an important business.

The town is crossed by Maine State Route 175.

There were 397 households, of which 19.1% had children under the age of 18 living with them, 52.6% were married couples living together, 4.8% had a female householder with no husband present, 2.5% had a male householder with no wife present, and 40.1% were non-families. 33.8% of all households were made up of individuals, and 14.6% had someone living alone who was 65 years of age or older. The average household size was 2.08 and the average family size was 2.63.

An 11th-century Norse coin was (allegedly) found in Brooklin at the site of an excavation of a Native American trading center. If true this would be the only physical evidence of Nordic settlers having entered the area of what is now the United States. If not an outright hoax, it is also possible that the coin was brought to the site not directly by Vikings, but rather through trading. 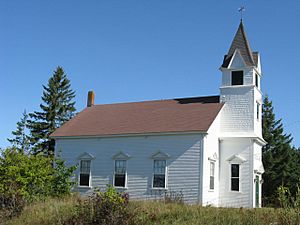 All content from Kiddle encyclopedia articles (including the article images and facts) can be freely used under Attribution-ShareAlike license, unless stated otherwise. Cite this article:
Brooklin, Maine Facts for Kids. Kiddle Encyclopedia.