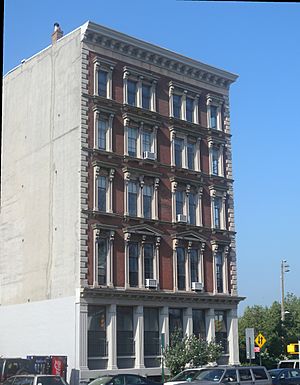 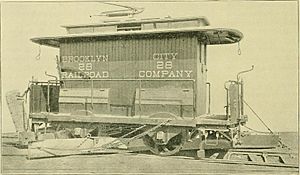 The Brooklyn City Railroad (BCRR) was the oldest and one of the largest operators of streetcars (horsecars and later trolleys) in the City of Brooklyn, New York, continuing in that role when Brooklyn became a borough of New York City in 1898.

The BCRR was incorporated on December 17, 1853 with capital of $2,500,000, a large sum in those days. Its first line, the Myrtle Avenue Line, was the first horsecar line in Brooklyn, and opened on July 3, 1854. The line operated from Fulton Ferry via Fulton Street and Myrtle Avenue to the former stagecoach stables at Marcy Avenue. The New York State Legislature permitted it to reduce its capital to $1,000,000 in 1855.

The following lines were operated by the BCRR at the time of its 1893 lease to the BHRR:

Built after the consolidations began

From the Brooklyn Crosstown Railroad and its leased Calvary Cemetery, Greenpoint and Brooklyn Railroad, leased July 30, 1889

From the New Williamsburgh and Flatbush Railroad and its leased Greenpoint and Lorimer Street Railroad, leased July 31, 1889

From the Grand Street and Newtown Railroad, leased April 29, 1890

The LIT was foreclosed and reorganized in 1895 as the Brooklyn Rapid Transit Company (BRT), which soon acquired, through lease or stock ownership, most of the trolley and rapid transit lines in Brooklyn.

The BRT (also known as "the rapid transit company" during its years of acquisition) became the public face of transportation in Brooklyn. Nevertheless, the BRT operated all of its lines through its operating companies, some of which were created just for that purpose, and others that were leased or subsidiaries, such as the Brooklyn City. Patrons may have noticed this in subtle ways, such as that streetcar transfers had the letters "B.C.R.R." imprinted on their face.

In 1919, the BRT went into receivership as the result of a number of factors, such as the serious inflation of World War I, and not helped by the Malbone Street Wreck on the Brighton Line, which killed at least 93 people on November 1, 1918.

Though the BRT was bankrupt, the Brooklyn City was declared solvent, and its charter and separate corporate existence were resumed. The lease by the Brooklyn Heights was ended and the lines the BCRR controlled in 1893 and more became its lines again on October 19, 1919. The BCRR had its own crews, cars and carbarns, and even purchased new equipment in its own name, though the overall planning and management was still effectively with the BRT. A negative consequence for passengers was that BCRR lines no longer issued transfers to the lines still with the BRT, and vice versa.

All content from Kiddle encyclopedia articles (including the article images and facts) can be freely used under Attribution-ShareAlike license, unless stated otherwise. Cite this article:
Brooklyn City Railroad Facts for Kids. Kiddle Encyclopedia.