Brooten is a city in Stearns and Pope counties in the U.S. state of Minnesota, United States. The population was 743 as of the 2010 census. Almost the entire city is within Stearns County, with a small portion in Pope County.

The Stearns County portion of Brooten is part of the St. Cloud Metropolitan Statistical Area.

Brooten was laid out in 1886, when the Soo Railroad was extended to that point. The city was named after the LiaBraaten family of settlers. A post office has been in operation at Brooten since 1886. 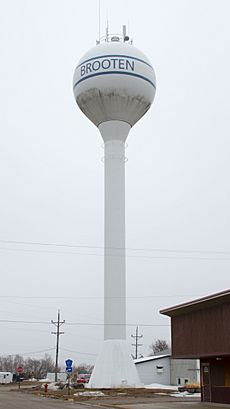 According to the United States Census Bureau, the city has a total area of 1.57 square miles (4.07 km2), all of it land.

There were 294 households, of which 27.6% had children under the age of 18 living with them, 41.8% were married couples living together, 10.5% had a female householder with no husband present, 4.4% had a male householder with no wife present, and 43.2% were non-families. 38.4% of all households were made up of individuals, and 22.1% had someone living alone who was 65 years of age or older. The average household size was 2.28 and the average family size was 3.00.

Brooten hosts a community celebration called Bonanza Valley Days on the second weekend of July. It begins with a dance on Friday and ends with an Ice Cream Social on Sunday. Events include a bike rally, fireworks, pageant, kiddie parade, grand parade, and more.

Belgrade–Brooten–Elrosa Elementary School is located in Brooten. The school is part of the Belgrade-Brooten-Elrosa School District—ISD #2364.

Minnesota State Highway 55 serves as a main route in the community.

The Brooten Municipal Airport is approximately one mile southeast of the city and has a paved, 3500-foot runway.

All content from Kiddle encyclopedia articles (including the article images and facts) can be freely used under Attribution-ShareAlike license, unless stated otherwise. Cite this article:
Brooten, Minnesota Facts for Kids. Kiddle Encyclopedia.