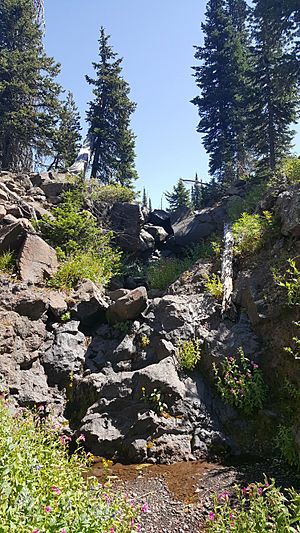 A probable location for Brower's Spring in Montana

Brower's Spring is a spring in the Centennial Mountains of Beaverhead County Montana that was marked by a surveyor in 1888 as the ultimate headwaters of the Missouri River and thus the fourth longest river in the world, the 3,902-mile (6,280 km)-long Mississippi-Missouri River.

The spring is named for Jacob V. Brower who in 1896 declared it to be the source of the Missouri in his book published by the Pioneer Press titled The Missouri river and its utmost source. He visited the site in 1895 and buried a copper plate upon which the name of the river and the date were engraved.

The spring is 100 miles (160 km) further than the spot Meriwether Lewis reported in 1805 as the source of the river above Lemhi Pass on Trail Creek. Both sources are near the Continental Divide in Montana. It is 298.3 miles (480.1 km) upstream from where the name "Missouri River" is first used.

Though the copper plate has not been located, the site of Brower's Spring is believed to be at about 8,800 feet (2,700 m) on the north fork of where Hell Roaring Creek divides near its source. It is commemorated by a rock pile. Hell Roaring Creek flows west into the Red Rock River, which flows through Upper, then Lower Red Rock Lakes, west through Lima Reservoir, and then northwest into Clark Canyon Reservoir. From Clark Canyon Reservoir the Beaverhead River flows northeast to join the Big Hole River, forming the Jefferson River, which with the Madison and Gallatin Rivers form the Missouri at Missouri River Headwaters State Park at Three Forks, Montana.

Brower's location is just below a ridge extending to the southeast from Mt. Jefferson 2 miles (3 km) to the northwest, and is 1.6 miles (2.6 km) southwest of the Sawtell Peak Observatory in Idaho, about 20 miles (32 km) southwest of West Yellowstone, Montana, and about 1,600 feet (500 m) southwest of the nearest point on the North American Continental Divide.

Brower's Spring is not listed as an official name on the Geographic Names Information System maintained by USGS.

All content from Kiddle encyclopedia articles (including the article images and facts) can be freely used under Attribution-ShareAlike license, unless stated otherwise. Cite this article:
Brower's Spring Facts for Kids. Kiddle Encyclopedia.