Brown v. Board of Education II facts for kids

Brown v. Board of Education II (often called Brown II) was a Supreme Court case decided in 1955. The year before, the Supreme Court had decided Brown v. Board of Education, which made racial segregation in schools illegal. However, many all-white schools in the United States had not followed this ruling and still had not integrated (allowed black children into) their schools. In Brown II, the Court ordered them to integrate their schools "with all deliberate speed."

In Brown II, the Supreme Court also set out rules about what schools needed to do to de-segregate. Finally, it explained how the United States government would make sure the schools did de-segregate.

After the Supreme Court decided the original Brown case, it planned to hear arguments during its next court session about just how school de-segregation was going to happen. Segregation in United States schools had existed for centuries. The Court understood that it would not be easy to get the states to follow its ruling and de-segregate their schools.

When it decided the original Brown case in 1954, the Supreme Court had combined Brown with four other cases. The Court decided all five cases together as one, which it called Brown v. Board of Education. This meant that in Brown II, the Court was again deciding about five different cases. These were:

There were a few legal questions that the Supreme Court had to decide in Brown II. For example:

The National Association for the Advancement of Colored People (NAACP), whose lawyers had won Brown, argued that school de-segregation should begin right away. The states argued back that this would be too difficult and too expensive, and that they needed more time to de-segregate.

However, the Court refused to order the schools to integrate right away, like the NAACP had wanted. It also did not set any clear deadline for when schools needed to be de-segregated. In the Court's majority opinion, Chief Justice Earl Warren wrote that the states should integrate "with all deliberate speed."

To many people, it was not clear exactly what this meant. It also meant that the Court was denying relief to the black students in the Brown lawsuits. As constitutional law scholar Steven Emanuel explains:

Instead of ordering the states to de-segregate right away, the Court created a slower plan. It gave federal district courts the power to look after whether schools were de-segregating. Justice Warren wrote: "[These] courts will [make sure] that the defendants make a prompt and reasonable start" toward obeying Brown. 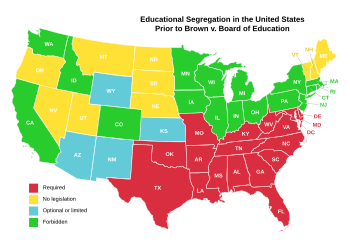 School segregation before Brown. Many schools stayed segregated for years even after Brown II

However, many states, especially in the South, were able to avoid integrating their schools for years because Brown II did not set a specific deadline for integration. Justice Warren's ruling that schools needed to de-segregate "with all deliberate speed" was vague and could have many different meanings. States and schools that did not want to integrate chose meanings that gave them excuses not to let black students into their schools.

For example, based on the Brown II ruling, a federal district court ruled that Prince Edward County, Virginia, did not have to de-segregate its schools right away. Several years later, in 1959, a federal court of appeals ordered the county to start de-segregating its schools. Prince Edward County responded by refusing to fund (give any money to) the county's schools. With no money, the schools had to close. They stayed closed for five years, from 1959 to 1964.

Prince Edward County helped white students go to white-only private schools. Black students could not go to school at all, unless they moved to a different county.

Finally, in 1964, the United States Supreme Court ruled that what Prince Edward County was doing was unconstitutional, and ordered the schools to re-open – without segregation.

All content from Kiddle encyclopedia articles (including the article images and facts) can be freely used under Attribution-ShareAlike license, unless stated otherwise. Cite this article:
Brown v. Board of Education II Facts for Kids. Kiddle Encyclopedia.