Lowell Bruce Laingen (August 6, 1922 – July 15, 2019) was an American diplomat. He was the U.S. Ambassador to Malta from 1977 to 1979. He worked under the Gerald Ford and Jimmy Carter presidencies. He was a World War II veteran. Laingen was best known for having been the most senior American official held hostage during the Iran hostage crisis.

He was the chargé d'affaires (head of diplomatic mission) at the U.S. Embassy in Tehran at the time of the crisis. He was born in Butterfield, Minnesota.

Laingen died on July 15, 2019 at a hospital in Bethesda, Maryland of problems caused from Parkinson's disease, aged 96. 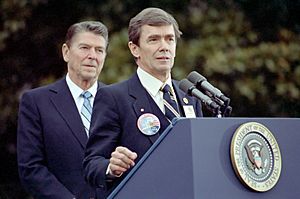 Laingen speaking at the White House on January 27, 1981, with President Ronald Reagan

All content from Kiddle encyclopedia articles (including the article images and facts) can be freely used under Attribution-ShareAlike license, unless stated otherwise. Cite this article:
Bruce Laingen Facts for Kids. Kiddle Encyclopedia.