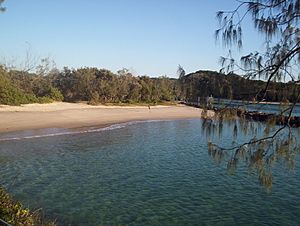 A small inlet near the mouth of the Brunswick River.

Brunswick Heads is a small town on the north coast of New South Wales, Australia in Byron Shire. At the 2016 census, the town had a population of 1,737 people.

Originally inhabited by people of the Bundjalung nation, the Brunswick River was charted by Captain Rous in 1828. His visit was followed more than 20 years later by cedar cutters whose activities led to the first town in what is now Byron Shire. By the 1880s Brunswick Heads was a busy port and a robust little commercial centre.

The township went into decline after the construction of the railway through Mullumbimby in 1894. In time however, Brunswick’s popularity for family seaside holidays returned, and from the 1920s onwards its fame spread far and wide. Holiday cottages from that period are still in evidence throughout the town.

Poet and Painter, Edwin Wilson (b.1942), started school at Brunswick Heads, as recorded in 'The Mullumbimby Kid'.

All content from Kiddle encyclopedia articles (including the article images and facts) can be freely used under Attribution-ShareAlike license, unless stated otherwise. Cite this article:
Brunswick Heads, New South Wales Facts for Kids. Kiddle Encyclopedia.