Buena Vista is a neighborhood in Miami, Florida, United States. It is located south of Little Haiti, north of the Miami Design District.

In the 1890s, Buena Vista was a small village whose founding and growth paralleled Miami's. During the Land Boom of the 1920s, the area was developed as the Biltmore and Shadowlawn subdivisions. Originally home to many Florida cracker immigrants from Georgia and North Carolina, the neighborhood soon became popular with the owners of nearby businesses. The houses reflect their original owners' rising social status and include fine examples of Mediterranean Revival, Mission, Craftsman, and Art Deco architecture style residences.

Buena Vista, Lemon City, and Little River were founded before the turn of the 19th-century and represent some of the earliest settlements in Miami-Dade County. The area known as Buena Vista was once a small village adjoining, but not within the corporate limits of Miami proper. Although preceded in age by pioneer Lemon City, a town located a little further north, the small village of Buena Vista dates its birth, development, and growth along with Miami’s. The founding of Buena Vista dates back to the days when the immense rock ridge extending between the Atlantic Ocean and the Florida Everglades was covered by a dense pine forest. The earliest history of the village is recorded in a survey made by government surveyors, and the locations of ht eland tracts are to this date still founded on this early document. 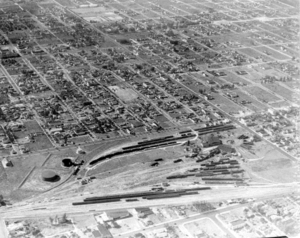 The land which became Buena Vista was originally part of the homesteads of William Henry Gleason and E.L. White. Gleason, a prominent and somewhat notorious figure in early Miami-Dade County politics, arrived in Miami after the Civil War was elected Lieutenant Governor of Florida. He left the area in 1876 but retained his homestead for several years, eventually turning it over to his son. As early as 1892, E.L. White homesteaded the area from North 41st Street to 54th Street between West 2nd Avenue and East 2nd Avenue. This was the area from which the Biltmore and Shadowlawn Subdivisions, which today make up the "Buena Vista East Historic District", were carved in the early 1920s.

The arrival of the railroad in 1896 marked the end of an era for the pioneer bayfront village of Lemon City, which had enjoyed tremendous importance to the Miami area by virtue of its docks. Now the train brought much needed supplies to the rest of Dade County, and lured people away from the bayfront community to Miami and its outlying areas. The Lemon City depot, built in 1896, drew business further west away from the bay, and the small village of Buena Vista gradually developed. One of the earliest subdivisions in the Buena Vista areas was the Buena Vista Biscayne Badger Club Subdivision, which was developed in 1910 as a bayfront community with a private water plant, streets, and a park with recreation dock on the bay. However, it was inland where the village took shape. By 1910, suburban Buena Vista could boast of one hotel known as the Courley House, its very own railroad depot on the Florida East Coast Railway line, a small post office building, tropical fruit groves, a fruit-packing house, a grocery store, and one religious institution, the Holy Cross Episcopal Church.

Other prominent citizens acquired land in Buena Vista. Among them was the millionaire, Charles Deering, who purchased a large tract of bayfront land east of the railroad, in the area now known as the Upper Eastside. This land is where the "Baypoint" neighborhood is now located. Much of the area fronting the bay was naturally wooded, and here Deering created an arboretum and sanctuary for birds and animals. There were no public roadways in the area east of the railroad, and since Deering strongly opposed the opening of such streets, the area was preserved in its pristine, virgin state for many years.

As the population of Miami grew between the late 1910s through the Boom era of the early 1920s, new areas reached northward along the old Dixie Highway (N.E. 2nd Avenue) and Avenue D (N. Miami Avenue), which was extended northward from N.E. 36th Street. The northern city limit of Miami was moved to N.E. 38th Street, and this took in a part of Buena Vista. Finally, on August 4, 1924, the new town of Buena Vista was incorporated and, together with the other incorporated areas of Coconut Grove and Silver Bluff, was annexed to the City of Miami the following year.

The Buena Vista East Historic District is located on the eastern side of Buena Vista, and is bound between NE 2nd Avenue and Miami Avenue from NE 42nd Street to NE 48th Street.

The Archdiocese of Miami operates:

All content from Kiddle encyclopedia articles (including the article images and facts) can be freely used under Attribution-ShareAlike license, unless stated otherwise. Cite this article:
Buena Vista (Miami) Facts for Kids. Kiddle Encyclopedia.