Little Haiti (French: La Petite Haïti, Haitian Creole: Ti Ayiti), is a neighborhood of Miami, Florida, United States. It is known historically as Lemon City, Little River and Edison. It is home to many Haitian immigrant residents, as well as many residents from the rest of the Caribbean.

Little Haiti is a known neighborhood of Haitian exiles. The area is characterized by its French–Creole designations, with its street life, restaurants, art galleries, dance, music, theatre performances, family owned enterprises, and other cultural activities.

Steeped in the complex and rich cultural histories of Caribbean immigrants who brought life to its area, Little Haiti has evolved into a colorful beacon in Miami’s arts communities. Throughout the years, small businesses like celebrated record stores, kitsch bars, and authentic eateries have eased into the neighborhood, creating their own particular patchwork within the already distinct Little River and newly named Little Haiti.

A 13-foot bronze statue of General Toussaint L'Ouverture, the father of the Haitian Revolution, stands on N Miami Avenue and 62nd Street." 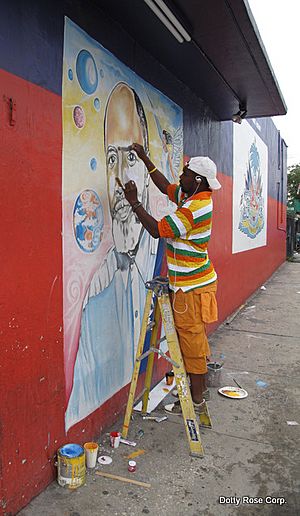 Portrait of Father Gérard Jean-Juste on a gable wall by Serge Toussaint in Little Haiti.

Viter Juste, a noted Haitian businessman, activist and respected community leader, came up with the name of Little Haiti. According to Jean-Claude Exulien, a retired professor of history and friend of Juste's since 1977, Juste wrote an article in the Miami Herald in which he first referred to the neighborhood as "Little Port-au-Prince." However, editors at the Miami Herald found the name, "Little Port-au-Prince," too long, so the newspaper shortened the term in the headline to Little Haiti. In 26 May 2016, Miami commissioners voted in favor of designating Little Haiti as an official neighborhood overlapping the historic Lemon City" and historic Little River'

The southern border is North (NW/NE) 54th Street, west to Interstate 95 and north along the Miami city boundary on North (NW/NE) 80th Street. It then goes back down along East (NE) Second and Fourth avenues. 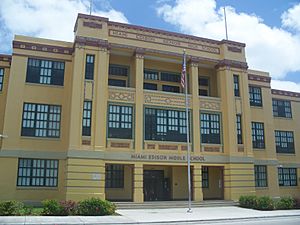 All content from Kiddle encyclopedia articles (including the article images and facts) can be freely used under Attribution-ShareAlike license, unless stated otherwise. Cite this article:
Little Haiti Facts for Kids. Kiddle Encyclopedia.