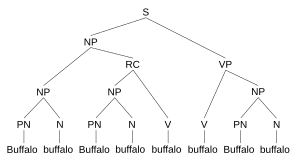 The sentence does not have punctuation. It uses three different meanings of the word "buffalo". They are:

Why it is confusing to read

The sentence is very confusing because: