Bulletin Building is a heritage-listed printing house at 162-164 Quay Street, Rockhampton, Rockhampton Region, Queensland, Australia. It was designed by Roy Chipps and built in 1926 by R Cousins & Company. It was added to the Queensland Heritage Register on 5 December 2005. 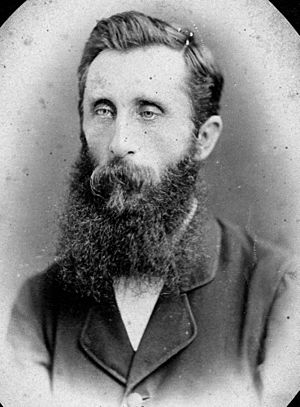 The Morning Bulletin earned a dominating position among the city's press is largely due to a long line of distinguished editors beginning with its founder William Hitchcock Buzacott and his brother, Charles Hardie Buzacott between 1861-1880. From 1880 and 1911, William McIlwraith and John Blair were the proprietors of the newspaper. In 1911, McIlwraith and Blair were followed by three generations of the Dunn family company, who carried the Bulletin into the modern age and the subsequent competition of electronic media.

Since 1861 the Bulletin's only name changes has been the dropping of "Northern Queensland Advertiser" from the title and in 1873 its emergence as the Morning Bulletin.

The popularity of The Morning Bulletin was such that, from 1873, it began the new year as a daily newspaper. It was the first daily paper, outside of Brisbane, issued in Queensland.

Following the death of WH Buzacott in 1880, William McIlwraith became the owner of the Morning Bulletin. In 1883, McIlwraith was joined in partnership by John Blair.

It was during McIlwraith's ownership, in the early 1880s when, with increases in the local population and the circulation of the paper, the Denham Street building became too small to house the growing staff. At this time, the office was moved to a building in East Street. It was from this office in East Street that a larger office in Quay Street was planned in the mid-1920s.

Dunn is credited with making The Morning Bulletin and The Capricornian more modern in the sense that there was provided to the reader more popular articles and after several years, a series of articles by staff members using pseudonyms.

The architect commissioned to design the new building for The Morning Bulletin was Roy Chipps. Chipps trained as an architect in New South Wales, moving to Brisbane in 1917 to commence an architectural practice, forming a partnership with CH Griffin from 1919-22. In 1923, following a move to Rockhampton, Chipps established a thriving practice which operated until 1936, when he was joined in partnership by WC Nichols. Chipps became a non-resident partner in the practice until it dissolved in 1939. The Chipps designed building remains as the office of The Morning Bulletin.

In May 1992, Australian Provincial Newspapers offered shares to the public through the Australian Stock Exchange, believing that the public should own their local newspaper. It was expected that this would raise and additional $80 million in revenue - this figure was well exceeded due to public demand. The funds have been earmarked for payment of existing debts and to allow for expansion of operations in their various plants, updating of computers and other facilities.

The Morning Bulletin currently employs about 165 staff, including casual staff. The composing areas, production and editorial staff rotate between day and night shifts. Currently, the Morning Bulletin has a circulation of approximately 20,000 on weekdays and 26,500 on Saturdays.

The Harris Web press, installed approximately 25 years ago, is the press utilised by Australian Provincial Newspapers and produces approximately 420 papers per minute. The printing press was removed from the Bulletin Building in 2007 and relocated to APN's new printing facilities in Hempenstall Street in the Rockhampton suburb of Kawana, a more industrial area of the city.

After almost 88 years of working from the Bulletin Building, The Morning Bulletin ceased operations from the iconic multi-storey building on 21 March 2014. The newspaper temporarily relocated to an office at 35 Fitzroy Street, opposite the City Centre Plaza shopping centre.

But despite the newspaper's editor, Frazer Pearce, favourably describing the Fitzroy Street building as "decades ahead" for the functionality of an evolving business, The Morning Bulletin only remained at the address for approximately six months. In late 2014, The Morning Bulletin moved again when the newspaper relocated to their current address at 220 Bolsover Street - a small ground-level office in a building shared with the ANZ Bank, Bank of Queensland and Ray White Real Estate.

In August 2015, it was announced former Rockhampton resident Bevan Slattery had purchased the old Bulletin Building in Quay Street. At the time of purchase, Slattery said that he didn't have any firm plans for the Bulletin Building but hoped to eventually create a space to expand his business while helping other start-up companies. 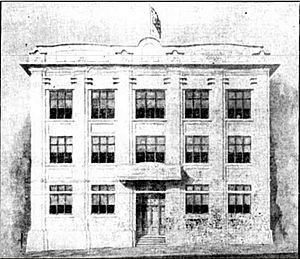 The Bulletin Building is a three-storey, rendered concrete building; the design of the building is classical with symmetrical facade, classical detailing and features which are stripped of ornamentation. The principal facade of the building is divided into bays by pilasters rising up through the three storeys dividing the face into five evenly spaced window bays. Large window openings line the facade; these are filled with non-original glazing in modern aluminium frames.

Internally, the first floor has a later suspended ceiling throughout. This floor consists of office space, including the addition of new walls to create further office spaces. Early remaining internal elements include four sets of steel-framed windows along the eastern side of the building and timber doors leading to the press room at the southern end of the first floor. The Harris Web Press takes up a substantial portion of the press room.

The second floor has a later suspended ceiling throughout with a generally open office plan. Early remaining internal elements on this floor include timber doors on the northern side of the floor.

The third floor space is used for conference room facilities, similar to the other floors; there is a later suspended ceiling throughout.

The Bulletin Building was listed on the Queensland Heritage Register on 5 December 2005 having satisfied the following criteria.

Constructed in 1926 as a purpose-built newspaper office, the Bulletin Building is significant for its association with Morning Bulletin which, established in 1861, is the earliest surviving newspaper in Rockhampton, and is an integral part of the history of Rockhampton and district.

The Bulletin Building is a good example of Stripped Classical architectural treatment, designed to be congruous with neighbouring 19th century buildings.

In its scale, massing and facade articulation, the Bulletin Building complements other Quay Street buildings most of which date from the 19th century, and is an integral part of a premier Queensland streetscape.

The Bulletin Building is significant for its association with the community of Rockhampton and surrounding area and those who have been, and continue to be, part of the Morning Bulletin story, including the editors, reporters and administration staff, past and present.

All content from Kiddle encyclopedia articles (including the article images and facts) can be freely used under Attribution-ShareAlike license, unless stated otherwise. Cite this article:
Bulletin Building, Rockhampton Facts for Kids. Kiddle Encyclopedia.