The site is between Port Meadow to the west and the railway line to the east, just north of the Aristotle Lane entrance to Port Meadow and the Trap Ground Allotments. The reserve is on a reclaimed landfill site and is approximately 30 hectares (74 acres) in area. There are open grass areas, some woodland, and a path around the edge of the site, as well as some paths crossing the site. Wildlife includes birds such as cuckoo, short-eared owl and jack snipe.

The site was used for landfill until the 1980s and is thus higher than Port Meadow, which regularly floods. The area was landscaped, with trees and hedge planting in the 1990s. The name may derive from the burgesses who endowed Godstow Nunnery with land. 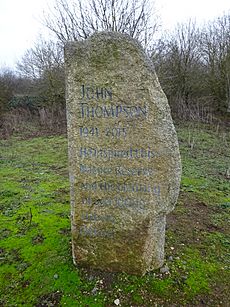 The site includes a memorial stone to John Thompson (1941–2015), the city of Oxford's landscape architect, who inspired the nature reserve and planted over 10,000 trees in Oxford.

There is a Friends of Burgess Field organization, formed in 2018. Volunteers help to maintain the site.

All content from Kiddle encyclopedia articles (including the article images and facts) can be freely used under Attribution-ShareAlike license, unless stated otherwise. Cite this article:
Burgess Field Nature Park Facts for Kids. Kiddle Encyclopedia.