In May 2012, Burke Mountain Resort was purchased by the owners of nearby Jay Peak Resort. The new ownership has improved Burke's snow making capability. Burke Mountain Resort is a ski in/ski out resort that is positioned at the midway point of the Mountain. The hotel has 116 rooms, and is open year-round. Behind the hotel is a Mid-Lodge called the Bear Den which features a full-service bar, soups and chili, and Live Music on Saturdays. 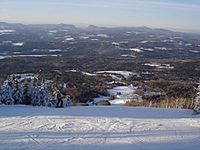 The ski area has two main sections of terrain.

The "Lower Mountain" consists of mostly Beginner terrain and is accessed by a high-speed detachable quad chairlift. There is also a "Bunny Slope" accessed by a J-bar surface lift. A beginner carpet lift was installed in 2010 to make the learning progression easier for first time skiers. There are a couple of terrain parks and a beginner glade (Enchanted Forest) here as well. This section of the mountain also has lift served mountain biking during non-snow months. The main Sherburne Base Lodge services this section of the resort. This lodge contains the rental shop, restaurant/bar, retail shop, and cafeteria.

The "Upper Mountain" consists of predominantly Intermediate and Advanced terrain. Trails on the upper mountain are accessed via two lifts, a Leitner-Poma platter lift and a high-speed quad chairlift (Mid-Burke Express), installed for the 2011–2012 season. The fixed grip "Willoughby" quad summit lift was partially removed circa 2017, as it had only seen operation during busy days. Trails vary from wide open groomed runs (Upper/Lower Dipper, Upper/Lower Willoughby), to steep ungroomed trails (Doug's Drop), to glades (Caveman, Throbulator, Jungle). The major trail visible from the Mid-Lodge (Upper/Lower Warren's Way) is the main training trail for Burke Mountain Academy and other local racing organizations. The intermediate/expert East Bowl trail is considered to be a signature "old New England style" trail due to its long, narrow, winding nature. There is a long traverse to and from this trail that comes with a "not snowboarder friendly" advisory. There is one "easy way" down the upper mountain via the "Deer Run" (formally "The Toll Road") trail (this is the auto toll road in the summer). This trail was reclassified from a beginner to an intermediate trail in the early 2000s due to the many intersections with a widened Super GS slope. The Mid-Burke Lodge services this section of the resort. This lodge contains a bar and a cafeteria. 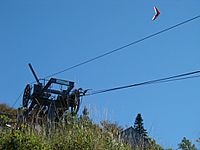 Summer activities include: Lift served downhill mountain biking on 8 purpose built trails featuring constructed jumps and berms. The lower mountain trails are accessed from the base lodge using the Sherburne Express Quad lift. The upper mountain has several expert mountain bike trails that are accessed by driving the toll road, a shuttle, or riding up the road. These trails are not lift served.

When the correct atmospheric conditions present themselves, Burke is also a popular location for Hang Gliding and Paragliding.

All content from Kiddle encyclopedia articles (including the article images and facts) can be freely used under Attribution-ShareAlike license, unless stated otherwise. Cite this article:
Burke Mountain Ski Area Facts for Kids. Kiddle Encyclopedia.