The Burren River is a river in Ireland, flowing through County Carlow. 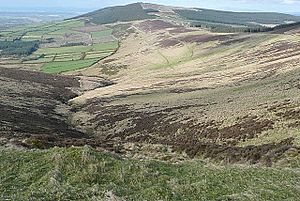 Headwaters of the Burren River on Mount Leinster.

The Burren River rises on the north face of Mount Leinster and flows northward under the R724 (Ullard Bridge, west of Fenagh) and under the N80. It continues northward through Rathoe meeting the Aghalona River in Inchisland and turns westwards, passing under the M9 in Moyle Big. The Burren River goes under the N80 again at Ballinacarrig Bridge. It flows through the southern part of Carlow town and passes under the railway line, R448 and R417 (Burrin Street) and then drains into the River Barrow.

All content from Kiddle encyclopedia articles (including the article images and facts) can be freely used under Attribution-ShareAlike license, unless stated otherwise. Cite this article:
Burren River Facts for Kids. Kiddle Encyclopedia.