Busbridge Church was founded by John and Emma Ramsden of Busbridge Hall. Building work took place between 1865 and 1867 and finished with the building's dedication in 1867. The church was designed by George Gilbert Scott and has a wrought-iron chancel screen by Edwin Lutyens, who also designed the First World War memorial. There are stained glass windows by Morris & Co., including Edward Burne-Jones, and later ones by Archibald Keightley Nicholson. The church is designated as a Grade II* listed building. 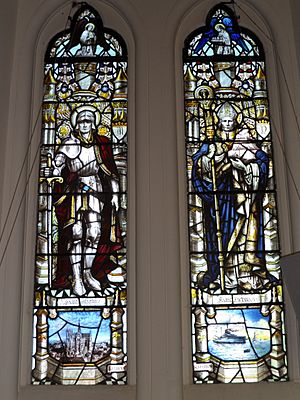 The churchyard contains several significant memorials by architect Sir Edwin Lutyens, who also designed the house at nearby Munstead Wood for his friend and collaborator Gertrude Jekyll. Lutyens designed Busbridge War Memorial, a Grade II* listed building, unveiled in 1922, which sits at the end of the churchyard at the junction of Brighton Road and Hambledon Road. It is one of dozens of Lutyens' war memorials around England and elsewhere after the First World War and one of fifteen of his War Crosses, which all share a similar design. The names of the village's war dead are listed on a plaque inside the church. Lutyens also designed memorials to Julia Jekyll (Gertrude's mother), Francis McLaren, and a joint memorial to Sir Herbert Jekyll (Gertrude's brother) and his wife Dame Agnes Jekyll, and to Gertrude herself.

On a Sunday morning there is the Quiet Service at 8:30am. They share Holy Communion every two weeks and follow both the book of Common Worship and the 1662 Book of Common Prayer. The service is approximately half an hour long and is led by robed clergy or LLMs.

Classic congregation then meets in Busbridge Church from 10.00am till 11.00am. They also follow Common Worship and host an all age service on the first Sunday of each month. Holy Communion is celebrated on the second and fourth Sundays. The worship and music style is both traditional with contemporary songs and hymns with the aid of a church organ.

The 6:30 is an informal evening service with extended periods of music and a relaxed atmosphere. Holy Communion is on the first Sunday of evening month.

Simultaneous with the Classic Service, a contemporary congregation meets across the road in Busbridge Junior School. Worship is band-led and there is regular use of modern media. Holy Communion is on the third Sunday.

All content from Kiddle encyclopedia articles (including the article images and facts) can be freely used under Attribution-ShareAlike license, unless stated otherwise. Cite this article:
Busbridge Church Facts for Kids. Kiddle Encyclopedia.