Bush Lake is located in the southwest corner of the Minneapolis suburb of Bloomington, Minnesota, near its border with Eden Prairie in Hennepin County. It has an area of 172.2 acres (69.7 ha) and a maximum depth of 28.0 feet (8.5 m). The lake contains many fish, but primarily Bluegill, Northern Pike, Pumpkinseed Sunfish, Yellow Bullhead, Yellow Perch.

When European settlement of the area began in the mid-19th century, the contemporary Bush Lake water body was a bay in Andersons Lake, now an interconnected series of lakes (each of which are also former bays) called the Anderson Lakes. By as early as 1890, there existed a distinct water body referred to as Bush Lake. 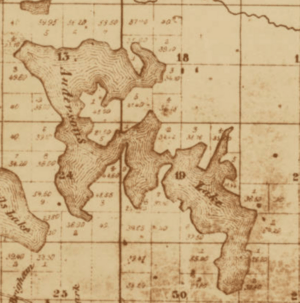 The contemporary Bush Lake as a bay on Andersons Lake (now the Anderson Lakes chain) in 1860.

All content from Kiddle encyclopedia articles (including the article images and facts) can be freely used under Attribution-ShareAlike license, unless stated otherwise. Cite this article:
Bush Lake (Hennepin County, Minnesota) Facts for Kids. Kiddle Encyclopedia.