Butlins Resort Minehead is a holiday camp operated by Butlins, located in Minehead in Somerset, England. It opened in 1962 and remains in use today. It was known as Butlin's Minehead until 1987, and as Somerwest World from then until 1999, when it reopened as Butlins Minehead Resort. 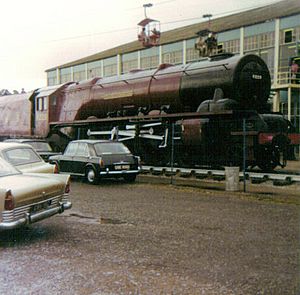 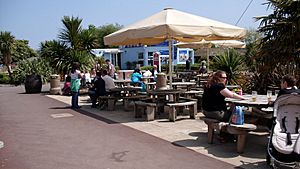 In the winter of 1961, Billy Butlin began work on creating his camp in Minehead. The site was selected because of its flatness, good rail links, and proximity to the town and sea. The site was not without its problems, however, including flooding. In order to solve this, a trench was excavated around the site and an earth wall constructed. The trench later became the site's boating pond.

The site opened to the public on 26 May 1962, the construction having cost £2 million. Over the next decade several attractions were added: the miniature railway in 1964, the chairlifts in 1965, and the monorail in 1967. Full size locomotives, Duchess of Hamilton and Knowle, were added in 1964. The locomotives left the camp in 1974 and have since been restored and preserved.

Butlins Minehead underwent major development during the 1980s, when problems with flooding were finally fixed, and both the indoor and outdoor swimming pools were converted into funpools with the addition of waterslides, water cannons, and various other novelty features. Additional accommodation was constructed, and caravan accommodation was introduced. Following the redevelopment work, the camp was renamed Somerwest World.

As at Bognor and Skegness, Minehead resort underwent further changes in 1998 and 1999 with the demolition of the Windsor building, relocation of the outdoor funpool and construction of the Skyline Pavilion in its place. However the changes at Minehead were less extensive than at the other two remaining Butlins resorts, and most of the original structures and layout remained intact. In 2007, further work in the Minehead resort was undertaken with the creation of new luxury timeshare apartments known as BlueSkies but has now been rebranded to the BaySide Apartments.

The Minehead camp has on several occasions played host to the Britain's Strongest Man contest, most recently in 2004, and since 2006 the Butlins Resort has been one of the venues for the World Wrestling Entertainment's UK winter tour. It also hosts the Professional Darts Corporation's UK Open and Players Championship Finals tournaments.

Butlins Minehead is the only Butlins still to have a small on-site chapel, and over the Easter period the entire resort plays host to an annual Spring Harvest, the largest Christian festival in the UK. Between Minehead and Skegness, the event attracts around 55,000 Christians from a range of denominations and plays host to many preachers, Christian musicians and dramatic artists.

Bloc Weekend is an annual music festival, devoted to electronic music of several genres, and incorporates both DJ sets and live shows. The first two Bloc events took place at Pontin's holiday camp in Norfolk. The 2009 event, which took place during 13–15 March, was moved to the larger Minehead resort. The 5,000 capacity event still sold out before the festival began. In 2010 and 2011, Bloc returned to Minehead for another sold-out show. After the disastrous Bloc event at the London Pleasure Gardens in 2012, Bloc saw a successful re-return to Butlin's Minehead in March 2015.

90's Weekend Featuring DJ Cudz and Raj was a music event hosted in 2012, devoted to Scooter, and incorporated both DJ sets and live shows. The event took place at Butlin's holiday camp in Minehead. The event, which took place during 15–17 July, was rated as amazing by Raj and Dean Wait. The 205,000 capacity event sold out 35 minutes after going on sale. The Guardian rated the weekend as "the best Scooter tribute ever made". Dave Benson Phillips was arrested for racially aggravated assault during DJ Cudz final set on the Sunday night.

All content from Kiddle encyclopedia articles (including the article images and facts) can be freely used under Attribution-ShareAlike license, unless stated otherwise. Cite this article:
Butlin's Minehead Facts for Kids. Kiddle Encyclopedia.