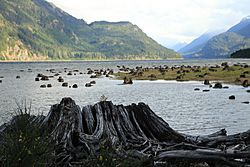 The lake was named after John Buttle, geologist and botanist from Kew Gardens, London, who came to the area with the Royal Engineers. They mapped the area around the lake in 1865. Buttle explored Vancouver Island as naturalist under Dr Robert Brown as part of the Vancouver Island Exploring Expedition in 1864. He discovered and mapped the lake the next year.

During 1955–1958, the Strathcona Dam was built on Upper Campbell Lake, raising the water level by 30 metres (98 ft). The raised water level coalesced Upper Campbell and Buttle Lake, raising the level of Buttle by 5 meters. Prior to the increase 600 hectares (1,500 acres) of forest at low-lying areas along the shore was harvested, and in many areas not fully cleared. At times of low water, there exist mudflats with stumps remaining from the forests that formerly stood there. 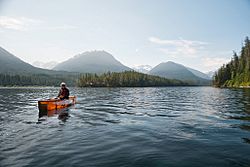 There are multiple campgrounds along Buttle Lake. Hiking, swimming, boating, fishing and bicycling are common activities in and nearby.

All content from Kiddle encyclopedia articles (including the article images and facts) can be freely used under Attribution-ShareAlike license, unless stated otherwise. Cite this article:
Buttle Lake Facts for Kids. Kiddle Encyclopedia.