The Campbell River is a river on Vancouver Island, British Columbia, Canada. It drains into Discovery Passage at the northwest end of the Strait of Georgia at the City of Campbell River. The Kwak'wala name for the river, or for the village near its mouth (see Campbell River Indian Reserve No. 11), is Tla'mataxw. The source of the river is Buttle Lake. 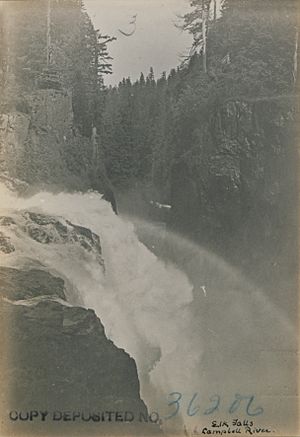 The river was named for Dr. Samuel Campbell, ship's surgeon aboard HMS Plumper from 1857 to 1861. Campbell Bay on Mayne Island and Samuel Island were also named for him, as may also have been Campbell Point on Loughborough Inlet and Campbell Island, the location of the community of Bella Bella, and Plumper's Cove on Keats Island.

All content from Kiddle encyclopedia articles (including the article images and facts) can be freely used under Attribution-ShareAlike license, unless stated otherwise. Cite this article:
Campbell River (Vancouver Island) Facts for Kids. Kiddle Encyclopedia.