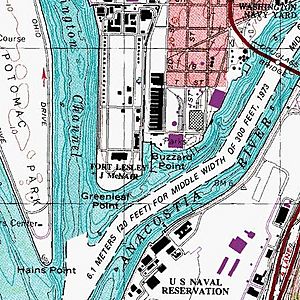 The Buzzard Point area as it appears on current USGS topographic maps. 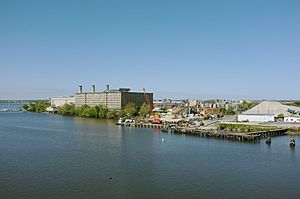 View of Buzzard Point and the Anacostia River.

Buzzard Point is an urbanized area located on the peninsula formed by the confluence of the Potomac and Anacostia Rivers in the southwest quadrant of Washington, D.C., United States.

The earliest documented name for the tip of the peninsula that now constitutes the area known as Buzzard Point was Turkey Buzzard Point, in use by 1673 when it appeared on a map published by Augustine Herman, a Bohemian explorer and one of the early European settlers of the Eastern Shore of Maryland. This name — often shortened to Buzzard Point — remained in use until the federal capital was planned during the 1790s, at which time it became Young's Point, from one Notley Young, the then owner of the land. Very soon thereafter it was renamed Greenleaf's Point — or Greenleaf Point — after James Greenleaf, a land speculator and purchaser of numerous lots in the new city, many of which were located in the vicinity of the Point.

George Washington had intended the use of some of Greenleaf's lots at the Point by the military, including for defensive works. In 1791, he and Pierre (Peter) Charles L'Enfant chose the site for the emplacement of a redoubt of some sort. They acquired approximately 28 acres (110,000 m2) by a deed of trust during that year and confirmed it in a July 25, 1798 executive order. Apparently, L'Enfant intended for a fortification to be placed there, according to his city plan, setting it aside as "Military District No. 5", because, as one author wrote, the "peninsula where the Potomac and Anacostia Rivers met was an obvious, natural military site." This site, sported a "one-gun battery mounted behind earth breastworks," possibly as early as 1791 but, at any rate, definitely by 1794. Within a few years, "The U.S. Arsenal at Greenleaf Point" grew from 28 to more than 89 acres (360,000 m2). By 1803, the "Fort" was first referred to as an "Arsenal" and Congress provided money for the construction of additional buildings.

During the American Civil War, experiments on new weaponry were performed both at the nearby Washington Navy Yard and at the Washington Arsenal as the Army installation had come to be named. Breechloaders, the Spencer carbine, and the Gatling gun were among the weapons tested on the peninsula. In 1908, the tip of the peninsula had the name Arsenal Point because of its military use at the time. Washington Arsenal was renamed Fort Lesley J. McNair in 1948.

From its earliest times the Point was largely ignored by the larger population of the District, much as in a larger sense all of Southwest Washington (referred to as “The Island” for its isolation) remained somewhat distinct. L’Enfant's and Washington's hopes for bustling river traffic at Buzzard Point wharves never came to be; instead, the area south of Q Street SW and between South Capitol and the Fort retained a largely rural aspect. Wrote an early resident of this period: “From the Navy Yard westward along the Eastern Branch [the Anacostia] to Greenleaf’s Point was a wild stretch of land with here and there a hovel or a house, and a stouring of brick kilns.” The marshy James Creek, flowing alongside the Arsenal (canalized in 1866 as the James Creek Canal but never connected to the existing Washington Canal) served only as a source of disease, used often for trash dumping.

An 1875 survey of Buzzard Point (below Q) found only 36 residences, eight “shanties” and six businesses, and these numbers barely increased over the years. Census numbers show the population peaking at 323 in 1894 (this from the Police Census for that year, found in the Metropolitan Police Annual Report) and then decreasing gradually: 231 in 1900; 185 in 1920; 19 in 1940. The area generally had proportions matched almost perfectly of black and white residents, living largely intermingled and all being of the working class. “Farmer” was the most common profession until about 1920, when “driver” replaced it.

The few accounts of this 1880–1920 period describe a modest community dominated by tidy truck gardens to the south and west and workers’ houses and some small businesses along the eastern border (South Capitol to First St SW). ”It is bordered on either side by true market gardens in the highest state of cultivation. The fields are interspaced with orchards of small fruit trees and occasionally these miniature farms have buildings set back from the road and profusely surrounded with chickens, stables and farm implements.” The neighborhood was visited seldom by outsiders: “A stranger is a very strange thing on Buzzard Point.”

Deterioration was evident by the 1910s as fields were abandoned and the trash-strewn James Creek Canal was progressively filled in. Unpleasant semi-industrial uses crept down South Capitol Street, most notably trash removal – refuse was hauled (legally or otherwise) to various points along that street and the River Anacostia, and also dumped into the river through the District's new sewage system. As the population decreased District planners tried to plan other uses for this neglected area. (Note that there was no bridge crossing from Buzzard Point across the Anacostia until 1950.) 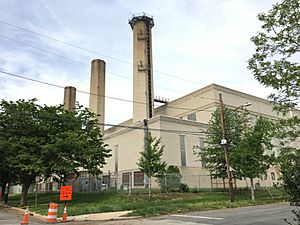 The District's new zoning system of 1920 optimistically implemented industrial zoning in the area of the Point, followed by the 1929 National Capitol Parks and Planning Commission's development planning report intending the area to be covered with railroad spurs and new large-scale manufacturing and utility uses that were unwelcome in other parts of the city. This effort destroyed what little was left of the old rural area without bringing in more than the railroad lines, the 1933 power plant of the Potomac Electric Power Company (PEPCO), and an oil/gas storage facility. During the mid- and late-twentieth century these two major facilities and adjoining smaller ones were mostly closed as new development began from the nearby Navy Yard area. Some boat yards and marinas maintained themselves on National Park Service-owned land along the Anacostia River. 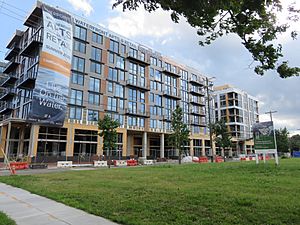 The United States Geological Survey's (USGS) most recent topographic maps identify the tip of the peninsula that contains Fort McNair as "Greenleaf Point". The USGS maps also identify a lesser point to the northeast of Greenleaf Point as "Buzzard Point". (James Creek, which was excavated during the 19th century to become a branch of the [now defunct] Washington City Canal, once separated these two points. Its name persists in the present day James Creek Marina, located between the two named points. In early times, James Creek was also known as St. James Creek.)

Although officially the name of only a tip of the peninsula, the term "Buzzard Point" now serves to identify much or all of an urbanized area south of M Street SW and west of South Capitol Street SW, excluding Fort McNair. The area has long been known as an industrial part of the city. Buzzard Point is close to Nationals Park, and not far from the Waterfront and Navy Yard – Ballpark Metro stations. The Buzzard Point waterfront extends from the Fort along the west bank of the Anacostia River as far as South Capitol Street at the Frederick Douglass Memorial Bridge. From west to east along it from the Fort are the James Creek Marina, the former headquarters of the U.S. Coast Guard, Buzzard Point Marina and Buzzard Point Park.

During 2007, Pepco Holdings announced that it sought to retire the Buzzard Point power plant by 2012.

All content from Kiddle encyclopedia articles (including the article images and facts) can be freely used under Attribution-ShareAlike license, unless stated otherwise. Cite this article:
Buzzard Point Facts for Kids. Kiddle Encyclopedia.