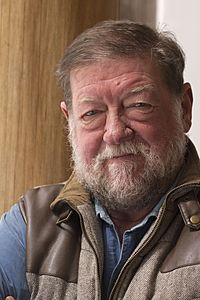 Sir Clive William Nicol, MBE (Japanese: C・W・ニコル; 17 July 1940 – 3 April 2020) was a British-born Japanese writer. He was born in Neath, Wales. In 1958 he visited the Arctic Circle to research eider duck. He spent 1967 to 1969 as a game warden in Ethiopia, setting up the new Semien Mountains National Park. He returned to Japan, writing a book about his Ethiopian experiences: From the Roof of Africa (1971).

He became a Japanese citizen, which he wrote about in Boku ga Nihonjin ni natta riyū ("Why I became Japanese").

He wrote both fiction and non-fiction books, in both Japanese and in English. His subjects included whaling (for which he went on a trip on a whaling vessel), the environment, martial arts and children's fiction.

All content from Kiddle encyclopedia articles (including the article images and facts) can be freely used under Attribution-ShareAlike license, unless stated otherwise. Cite this article:
C. W. Nicol Facts for Kids. Kiddle Encyclopedia.