Kids Encyclopedia Facts
Not to be confused with Newark Bay Bridge.

The Newark Bay Bridge of the Central Railroad of New Jersey (CNJ) was a four-track railroad bridge that had four main lift spans. It opened in 1926, replacing an outdated two track bascule span built in 1901, that in turn had replaced a wooden draw bridge that originally opened on 29 July 1864. The bridge served the main line of the CNJ, carrying daily interstate trains as well as commuter trains. The bridge connected Elizabethport and Bayonne at the southern end of Newark Bay. The designer of this bridge was J. A. L. Waddell.

The lift spans were a pair of two-track spans over two separate shipping channels; the longer span being 299 feet (91 m) long, while the shorter span was 210.75 feet (64.24 m), giving a navigable width of 216 feet (66 m) and 134 feet (41 m) respectively. Vertical clearance was 135 feet (41 m) open and 35 feet (11 m) closed. Each span was capable of independent movement, as well as any combination of tandem movements. Bridge movement, interlocking, and signals were controlled from a large manned structure on the operational midpoint between the east and west drawspans and above the tracks.

Despite the operational flexibility and safeguards built into the bridge, increase in marine traffic and ship size only made the bridge a greater maritime hazard. At the same time, however, decline in rail traffic did not make it any less of a hazard to the railroad. On 15 September 1958, a commuter train plunged off the south span which had been opened for marine traffic, killing 48 people, including former New York Yankees second baseman Snuffy Stirnweiss. On 19 May 1966, the French freighter S.S. Washington collided with the northeast lift span, rendering two tracks unusable. Despite an eventual 2nd Circuit judgment in CNJ's favor the span was never repaired as the two affected tracks were deemed redundant by the railroad due to the sharp decline in rail traffic and the momentous change in the railroad's operations which occurred less than a year after the accident.

After the Aldene Plan went into effect in May 1967 the only passenger service on the bridge was the Bayonne-Cranford shuttle, known as the "Scoot". The last freight train crossed the bridge in 1976 prior to the formation of Conrail; the last passenger train left Bayonne's Eighth Street Station on 6 August 1978. Despite Bayonne's efforts to save the bridge, demolition of the central lift spans began in July 1980 after the United States Coast Guard declared the structure a navigational hazard to ships. The trestle and approaches were removed in 1987-1988 when it became apparent that a replacement span was no longer feasible. Removal of the piers began in 2012. 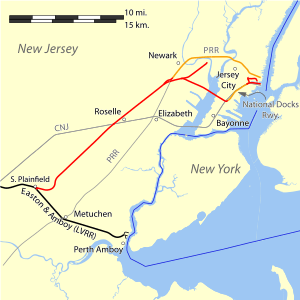 Map of rail lines around Essex, Hudson, and Union counties in New Jersey. The grey CNJ line from Bayonne to Elizabeth was carried by the CNJ's Newark Bay Bridge

All content from Kiddle encyclopedia articles (including the article images and facts) can be freely used under Attribution-ShareAlike license, unless stated otherwise. Cite this article:
CRRNJ Newark Bay Bridge Facts for Kids. Kiddle Encyclopedia.