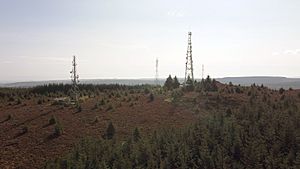 Aerial view of the summit of Cairn Mon Earn

Cairn Mon Earn or Cairn-mon-earn is a hill in Aberdeenshire, Scotland. 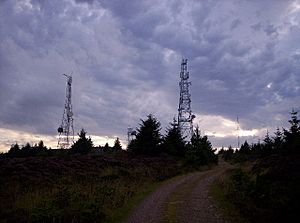 Cairn Mon Earn (OS: Cairn-mon-earn) lies within the Durris Forest, in the Mounth region of the Grampian Mountains. It forms the backdrop to Netherley and is visible from coastal hills such as Kempstone Hill and Megray Hill. 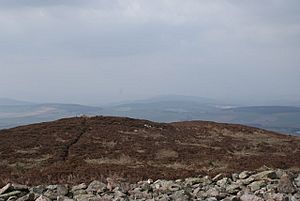 View from the summit of Cairn Mon Earn

Situated close to the summit is a substantial burial cairn of the Early Bronze Age. A modern Triangulation station (aka. Trig point) is located on part of the cairn.

Roman legions marched from Raedykes to Normandykes Roman Camp, somewhat east of Cairn Mon Earn as they sought higher ground evading the bogs of Red Moss and other low-lying mosses including the Burn of Muchalls. That march used the Elsick Mounth, an ancient trackway crossing the Mounth of the Grampian Mountains, lying westerly of Netherley.

All content from Kiddle encyclopedia articles (including the article images and facts) can be freely used under Attribution-ShareAlike license, unless stated otherwise. Cite this article:
Cairn Mon Earn Facts for Kids. Kiddle Encyclopedia.