Caldecott MRT station (CC17/TE9) is an underground Mass Rapid Transit (MRT) station on the Circle line, located in Toa Payoh, Singapore. This station will become an interchange with the Thomson–East Coast line in 2020.

As Bukit Brown MRT station is currently non-operational, the section of tracks between Caldecott station and Botanic Gardens MRT station is the longest between any two stations on the Circle line. Trains move at 80 km/h at this stretch. 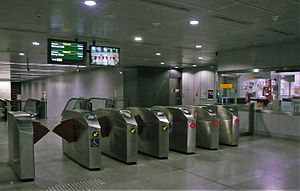 Concourse of the station. 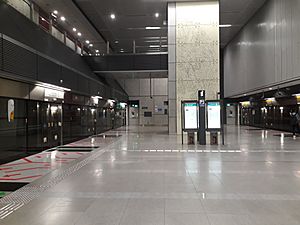 When the Circle line was planned, this station was planned to be an empty station, to be opened only when the area are more developed. It was only announced quite later that this station will open other stations of Stage 4 on 11 January 2007, and the station name was renamed to "Caldecott". The station opened on 8 October 2011.

Starting from 2020, Caldecott station will be an interchange station with the Thomson–East Coast line and will serve as the terminus from 2020 to 2021, where it would be replaced by Gardens by the Bay as the Stage 3 of the line opens.

Caldecott CCL station is one of eleven stations along the Circle line designated as Civil Defence (CD) shelters, which will be activated in times of national emergency. Apart from reinforced construction, the stations are designed and equipped with facilities to ensure the shelter environment is tolerable for people.

All content from Kiddle encyclopedia articles (including the article images and facts) can be freely used under Attribution-ShareAlike license, unless stated otherwise. Cite this article:
Caldecott MRT station Facts for Kids. Kiddle Encyclopedia.