Calvert City is a home rule-class city in Marshall County, Kentucky, United States. The population was 2,566 at the 2010 census. 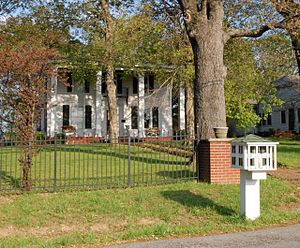 Calvert City was named for Potilla Willis Calvert. He built his home, Oak Hill, in 1860 and around a decade later gave a portion of his land to a new railroad, specifying that a station be built near his home. That station served as the starting point of the town, which was incorporated on March 18, 1871. The railroad station and post office long favored the shorter Calvert, but the Board on Geographic Names reversed its earlier decision in 1957 and switched to the longer form.

During the Ohio River flood of 1937, Calvert City's business district and much of the residential area was severely damaged by floodwaters.

In the 1940s, the construction of nearby Kentucky Dam by the Tennessee Valley Authority brought plentiful electric power that led to many industrial plants, mostly chemical manufacturers, to locate between the city and the Tennessee River. Merchant Luther Draffen was instrumental in attracting the dam and industrial plants.

Calvert City has 16 industrial plants that are a key source of employment for Western Kentucky. The majority are chemical manufacturers with some steel and metallurgical plants and industrial services firms.

Calvert City has a lending library, a branch of the Marshall County Public Library.

Calvert City is a hub for surface transportation. The city is the northern terminus of the Julian M. Carroll Purchase Parkway, providing a link to Memphis, Tennessee. The city is skirted on the south by Interstate 24, linking Calvert City to Nashville and St. Louis, and, via I-69, and via the Western Kentucky Parkway as well, Louisville and Lexington. The city has rail access through the Paducah and Louisville Railway main line and is a commercial port on the Tennessee River. There is no bus service or other mass transit.

All content from Kiddle encyclopedia articles (including the article images and facts) can be freely used under Attribution-ShareAlike license, unless stated otherwise. Cite this article:
Calvert City, Kentucky Facts for Kids. Kiddle Encyclopedia.