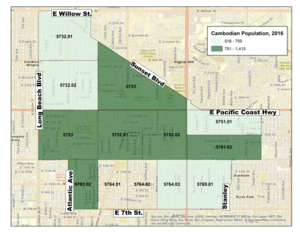 Fig. 12. This map showcases the jurisdiction of Cambodia Town based on the census tracts with the most Cambodian residents; the East Anaheim business corridor is within these boundaries. Retrieved from the 2012-2016 5-year American Census Survey.

Cambodia Town (also known as Little Phnom Penh or Little Cambodia) is the official name for a roughly one mile long business corridor along Anaheim Street between Atlantic and Junipero avenues in the Eastside of Long Beach, California. The area has numerous Cambodian restaurants, clothing stores, jewelry stores, and donut shops, as well as churches, temples, and service centers for Cambodian-Americans. There are many other businesses in the area, such as auto repair shops, that are Cambodian-owned.

Known as the "Cambodian capital of the United States", Long Beach has 19,998 residents of Cambodian descent (4% of the city's population). It is believed to be home to the second largest population of Cambodian immigrants outside Southeast Asia (there are approximately 1.4 million Cambodians in Thailand and approximately 1,055,174 in southern Vietnam where they are known as Khmer Krom) after the city of Paris, France. The city has its own Cambodian consulate. Many of the Cambodians in Long Beach came to the United States as refugees from Democratic Kampuchea from 1975 to 1979, as well as the 1978 invasion and occupation of Cambodia by Vietnam. Many settled around Anaheim Street.

The city of Long Beach also has an annual Cambodian New Year celebration.

The quest for official recognition

Some community members questioned any official designation for the area, saying that it could increase the Cambodian-Latino rivalry in the area, and that official recognition for a single ethnic community would be divisive in the ethnically diverse city of Long Beach. On October 25, 2006, the city council voted for a 90-day review period to allow more input from the community. In the end, official approval was obtained at the city council meeting on July 3, 2007:

"After lengthy discussion and several public comments, the City Council voted 8-1 to designate the stretch of Anaheim Street between Junipero Avenue and Atlantic Boulevard as Cambodia Town. The area houses many Cambodian businesses, and Long Beach is home to about 17,000 Cambodian-Americans, according to the city."

Over half of the Asian population of Cambodia Town is foreign born, and 60 percent of these individuals are United States citizens. This process and rate of naturalization indicates the community's efforts of assimilating to American society. 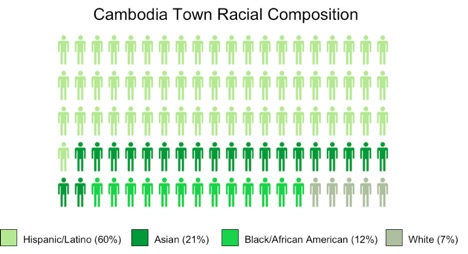 Cambodia Town's high poverty rate is partially due to low employment rates caused by language barriers and low educational attainment. In the United States, 54 percent of Asians hold a bachelor's degree, while only 10 percent of Asians in Cambodia Town hold a bachelor's degree. About 43 percent of Cambodians reported to having attended college but not earning a degree, thus implying high drop-out rates. In the United States, less than one-third of Cambodians hold less than a high school degree. Data aggregation consolidates the Cambodian experience with the general Asian population's experiences. Because rates of Asian educational attainment are so high, the low educational attainment of Cambodians is ignored. Cambodian youth are not provided the necessary resources, such as counseling or tutoring, to address specific issues that pertain to the Cambodian community.

All content from Kiddle encyclopedia articles (including the article images and facts) can be freely used under Attribution-ShareAlike license, unless stated otherwise. Cite this article:
Cambodia Town, Long Beach, California Facts for Kids. Kiddle Encyclopedia.