Kids Encyclopedia Facts
Not to be confused with Cameron County, Texas.

Cameron is a city in Milam County, Texas, United States. The population was 5,770 at the 2010 census. It is the county seat of Milam County.

According to the United States Census Bureau, the city has a total area of 4.2 square miles (11 km2), all land.

Soon after Texas became a U.S. State, the Texas Legislature authorized a seven-member commission to find a permanent site for the Milam County seat. The commission purchased a 60-acre tract of Daniel Monroe's headright on the Little River in 1846 and named the new community Cameron after Ewen Cameron, a Scot highlander prominent in the Texas Revolution and a member of the Mier Expedition during the war with Mexico. When the courthouse in Cameron was completed later that year, county records were transferred to Cameron from Nashville – a community situated along the Brazos River that had served as the Milam County seat during the period when Texas was an independent Republic. The new town struggled due to its isolated location with the nearest railroad being fifty miles away. In the late 1840s and early 1850s, several attempts were made to navigate the Little River in order to give Cameron easier access to trade routes. The most successful attempts occurred in 1850 after heavy rains made the river rise. J.W. McCown, Sr. persuaded Captain Basil M. Hatfield to bring his steamboat "Washington" through the upper Brazos up to the Little River. The steamboat and the merchandise it brought caused great excitement among the locals, and a two-day celebration was held when the boat tied up two-and-a-half miles east of Cameron. Despite this, however, navigation of the river was impractical on a regular basis and places such as Port Sullivan and Nashville developed into Milam County's dominant business centers during the 1850s and 1860s. More competition came in the 1870s when nearby Rockdale was established on the International-Great Northern Railroad. Faced with these challenges, some Milam County residents began to question whether Cameron should remain the county seat instead of the newly prosperous town of Rockdale. Elections were held in 1874 and 1880 on the issue with the results going in favor of maintaining the status quo.

In 1881, the Gulf, Colorado and Santa Fe Railway arrived in Cameron. This improved the local economy and led to subsequent population growth. In the six-year period between 1878 and 1884, the total number of residents rose from around 500 to 800, an increase of sixty percent. Cameron had attempted to incorporate in 1856, 1866, and 1873, but each time the charter was allowed to lapse. It was officially incorporated in 1889. The San Antonio and Aransas Pass Railway arrived in 1890, giving the town another positive boost. By 1892, the population stood at nearly 2,000.

Although cotton dominated the economy of Cameron during the 19th century, the 20th century brought more diversified industries. The discovery of oil in neighboring Williamson County in 1915 prompted Milam County residents to initiate their own exploration. The Minerva-Rockdale oil field was discovered in 1921 and provided new opportunities for investment. In the 1920s and 1930s, several milk product companies were operating in Cameron, including the Kraft-Phenix Cheese Corporation. At the 1930 census, the population was 4,565. That figure rose to 5,040 in 1940.

Cameron residents received much-needed job opportunities in the 1950s when the Aluminum Company of America built a plant southwest of Rockdale. Jobs at the plant, as well as the lignite industry that supplied the plant's power, revitalized the economy of Milam County. The plant closed in 2009. Between 1950 and 1960, Cameron registered an increase of 588 residents, from 5,052 to 5,640.

This level of growth would not continue, however. The Texas and New Orleans Railroad discontinued its track from Cameron south to Giddings. Southern Pacific, which had taken over the Texas and New Orleans, abandoned its track from Cameron north to Rosebud. The population would continue to experience slight fluctuations throughout the remainder of the late 20th century.

On May 27–31, 2010 a campground outside of Cameron hosted the Burning Flipside festival, which brought over 2400 campers through Cameron. 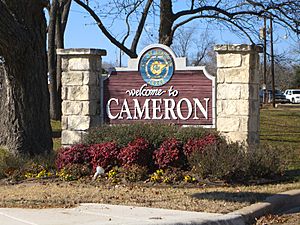 There were 2,090 households out of which 32.9% had children under the age of 18 living with them, 45.9% were married couples living together, 17.2% had a female householder with no husband present, and 32.8% were non-families. 31.2% of all households were made up of individuals and 18.4% had someone living alone who was 65 years of age or older. The average household size was 2.58 and the average family size was 3.25.

The climate in this area is characterized by hot, humid summers and generally mild to cool winters. According to the Köppen Climate Classification system, Cameron has a humid subtropical climate, abbreviated "Cfa" on climate maps.

All content from Kiddle encyclopedia articles (including the article images and facts) can be freely used under Attribution-ShareAlike license, unless stated otherwise. Cite this article:
Cameron, Texas Facts for Kids. Kiddle Encyclopedia.