Camp Grayling was founded in 1913 on an initial grant of land from Grayling lumber baron Rasmus Hanson to the State of Michigan for military training. It includes 147,000 acres (590 km2) in Crawford, Kalkaska and Otsego counties. Troops first started training at Camp Grayling in 1914. 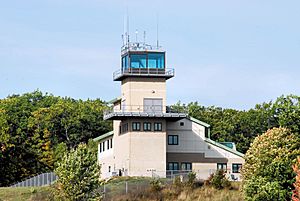 For two weeks each year starting in 2014 through 2018, Camp Graying will host the National Guard's Exportable Combat Training Capability program.

Each year, Camp Grayling schedules training for over 20,000 military personnel from National Guard units from Indiana, Illinois, Michigan, and Ohio, as well as regular Army and Reserve units. The installation provides over 200 full-time jobs to local residents. Consequently, Camp Grayling is one of the largest employers in the County. The federal dollars that pay employee salaries are often used to pay local taxes and to support schools, hospitals, churches and local businesses, a partnership that has proven itself over generations.

Camp Grayling has over 600 soldiers in traditional Army National Guard units regularly assigned to it.

The camp activities generate over $30 million annually in the local economy. The camp has a partnership with the Northern Michigan Law Enforcement group, for training purposes. The camp has small arms ranges. They also have urban assault ranges. Camp Grayling has an IED (improvised explosive device) Lane. This is used to train troops to protect themselves from IED’s. They have a 10.2 mile live fire convoy commander’s reaction course that trains commanders. The base gets used for research and development. Training at Camp Grayling occurs year round. In the 2010 fiscal year the base was used for 320 days. The camp hosts the Marines and the Navy.

Much of the land is accessible to the public for hunting, fishing, snowmobiling and other recreational uses (when military training isn't happening).

A central attraction of Camp Grayling is Lake Margrethe.

All content from Kiddle encyclopedia articles (including the article images and facts) can be freely used under Attribution-ShareAlike license, unless stated otherwise. Cite this article:
Camp Grayling Facts for Kids. Kiddle Encyclopedia.