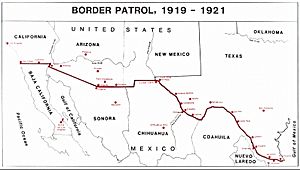 Camp Harry J. Jones was an encampment of the United States Army. Located near Douglas, Arizona, it was active during the Pancho Villa Expedition and World War I.

The United States Army established a camp near Douglas, Arizona in 1910, one of a number of camps established along the border with Mexico to provide border security during the conflicts that were part of the Mexican Revolution. The site was renamed Camp Jones in 1916, in honor of a soldier who had been accidentally shot and killed by a stray bullet while on guard duty during the Second Battle of Agua Prieta, which took place between revolutionaries and Mexican government forces across the border from Douglas.

Camp Jones was an important facility during the 1916-17 Expedition against Pancho Villa, which was commanded by John J. Pershing, with several cavalry units stationed there to provide security against incursions by Villa's forces. The camp also served as the mobilization site for the Arizona National Guard when it was called up to take part in the Villa Expedition.

During the Villa expedition, units based at Camp Jones made extensive use of automobiles and trucks, and also employed aircraft for observation and scouting. This use of motorized vehicles was the Army's first major effort to employ mechanized forces, and foreshadowed its transition away from horses and mules.

Camp Jones remained an important location during World War I, and was the headquarters of the Army's Arizona District. Soldiers stationed there continued to patrol the U.S. border with Mexico to deter possible attacks by German soldiers or infiltration by German spies.

Camp Jones was closed in January 1933. Several southwestern border posts were proposed for closure as a cost savings measure during the Great Depression. Local leaders in Douglas and state leaders in Arizona attempted to prevent the closure, but were unsuccessful. Many of the troops then stationed at Camp Jones were transferred to nearby Fort Huachuca. Soldiers of the 10th Cavalry Regiment salvaged buildings and other equipment, much of which was sold or moved to Fort Huachuca. There are no existing traces of Camp Jones, and the location of the camp is now a residential area within the Douglas city limits.

The camp entrance was described in a contemporary account as being at the east end of 10th Street in Douglas. An existing map shows the camp as bounded on the west by North Washington Avenue, on the north by East 13th Street, and on the south by 1st Street. This area corresponds roughly to the area between Calvary Cemetery in Douglas and the Douglas Municipal Airport.

All content from Kiddle encyclopedia articles (including the article images and facts) can be freely used under Attribution-ShareAlike license, unless stated otherwise. Cite this article:
Camp Harry J. Jones Facts for Kids. Kiddle Encyclopedia.