Kids Encyclopedia Facts
This page is about the former Army and Navy base in San Diego. For other locations, see Fort Kearny (disambiguation).

Camp Kearny was a U.S. military base (first Army, later Navy) in San Diego County, California, on the site of the current Marine Corps Air Station Miramar. It operated from 1917 to 1946. The base was named in honor of Brigadier General Stephen W. Kearny.

Panorama of Camp Kearny in 1918 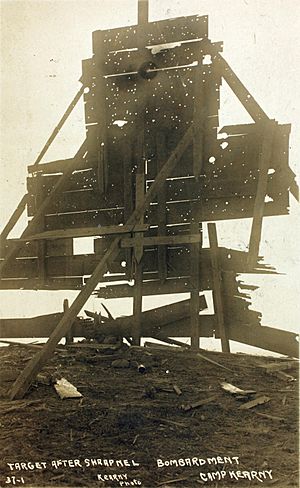 Target at Camp Kearny after bombardment by shrapnel; World War I era

The camp was established by the Army in 1917 on 12,721 acres (51.48 km2) of land on a mesa north of San Diego. The area included the 2,130-acre (8.6 km2) Miramar Ranch, which had originally been established by newspaperman E. W. Scripps and later sold to the Jessop family. It was Scripps who named the area Miramar, meaning "view of the sea".

The new base was named in honor of Brigadier General Stephen W. Kearny, a leader in the Mexican-American War who also served as a military governor of California. Camp Kearny was one of 32 new camps created by the Army in 1917 as a mobilization and training facility for troops on their way to battlegrounds of World War I. The first commander was Major James Stuart McKnight. Army aircraft occasionally landed on the parade ground, but an actual airfield was not established during World War I.

After the war, the camp was used as a demobilization center and was closed in 1920. It was largely abandoned after 1920 but was retained by the government for use as a military and civilian airfield. The U.S. Public Health Service used it for a time. In 1927 the Ryan Aircraft Company used the field to weight-test the plane The Spirit of St. Louis which they were then building for Charles A. Lindbergh. During 1929-1930 the facility was known as Airtech Field, operated by the San Diego Air Service Corp.

In 1932 the Navy installed a mooring mast for helium dirigibles on the base. The mast was used for visits by the Navy's two enormous airships, the USS Akron and USS Macon, each 785 feet (239 m) long. The Akron first visited Camp Kearny on May 11, 1932. That mooring ended in disaster when a gust of wind carried the airship upward, killing two ground handlers and injuring a third. However, the Navy continued to use the facility, and the Macon moored at Camp Kearny four times during 1934. The airships were homeported at Moffett Field in Sunnyvale, California, whose civic leaders had won a vigorous public relations battle with San Diego in the late 1920s to become the host of the Navy's airfield for dirigibles.

In 1940 the Navy began a series of projects to improve and expand Camp Kearny. By 1941 the base contained more than 26,000 acres (110 km2). On February 20, 1943, the area was commissioned as Naval Auxiliary Air Station Camp Kearny. (By then the misspelling "Kearney" had become so common that the base was actually commissioned as "NAAS Camp Kearney".) It had three runways: a 3,000 feet (910 m) asphalt runway mainly used for aircraft parking, and two 6,000 feet (1,800 m) concrete runways. The primary mission of the base was training pilots in the use of PB4Y Liberators (B-24s), which were built by the nearby Consolidated Aircraft Company. 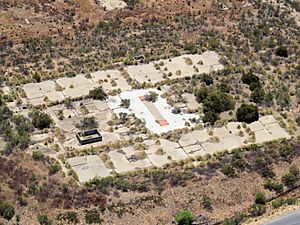 Aerial view of some of the ruins of Camp Elliot, 2011

After the end of the war, the Navy used Camp Kearny for demobilization. On May 1, 1946, the Navy departed Camp Kearny, handing it over to the Marines, and the station became MCAS Miramar. In 1947, the Marines moved to MCAS El Toro in Orange County, California, and Miramar was redesignated as a Naval Auxiliary Air Station, NAAS Miramar, followed by upgrade to full air station status as a Master Jet Base and renamed NAS Miramar.

All content from Kiddle encyclopedia articles (including the article images and facts) can be freely used under Attribution-ShareAlike license, unless stated otherwise. Cite this article:
Camp Kearny Facts for Kids. Kiddle Encyclopedia.