Camp Meeker is an unincorporated community, Sonoma County, United States, located on the Bohemian Highway, between Occidental and Monte Rio. It has approximately 350 homes on properties ranging from a couple thousand square feet to many acres, some flat and sunny, some on steep narrow gauge railroad type one-way streets. The population hovers around 425.

Set amidst redwoods directly on Dutch Bill Creek, it gets an average of 55 inches of rainfall spread over about 69 average days during the winter season. 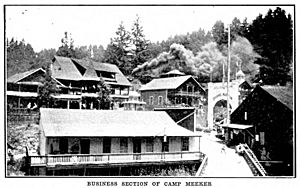 Camp Meeker takes its name from Melvin Cyrus Meeker, a lumber baron who established several mills in the area c. 1866.

Located on the North Pacific Coast Railroad (since abandoned), Camp Meeker was a center for logging the coast redwoods that built and then rebuilt San Francisco after the 1906 earthquake. After logging the trees, Meeker subdivided Camp Meeker in 1898, and lots (each 25 feet (7.6 m) by 12 feet (3.7 m) with a one-room cabin) sold for $75. Around 1900, it was primarily a vacation place for people from San Francisco.

Camp Meeker is the home of St. Dorothy's Rest, a retreat center and summer camp.

Fire protection is provided by the Camp Meeker Volunteer Fire Department. In 2003, the department claimed that Camp Meeker was the only place in Sonoma County which places fire hydrants every 500 ft (150 m).

As of December 2001, one-year class wild coho salmon were spawning in Dutch Bill Creek. In 2002 Dutch Bill Creek was part of the captive broadstock program, and since 2006 juvenile coho have been released in the creek as a part of this program.

In November 2009, Camp Meeker revamped its recreational park on Dutch Bill Creek by removing a WPA-era dam and installing a bridge in its place. The entire area was rebuilt by PCI, Inc. under contract with the Gold Ridge Resource Conservation District after years of study.

Once home to the now legendary Camp Meeker Players who played at the outdoor stage and the "barn", both venues having returned to nature.

Before becoming a "village" Camp Meeker was a lumber "town" followed by a summer enclave with the "year rounders" and the "summer folk."

Prior to the Camp Meeker Players, locals and summer folk, put on extremely entertaining talent shows. Summer resident, Marian Laber, owner of a studio in San Francisco, choreographed Saturday night performances at the "Stage." Marion's work included but was not limited to; rehearsals, assembling and producing costumes, music and lighting. Logs provided seating for the shows. On occasion gentlemen from Bohemian Grove would take in our local performances.

After the shows, most would stop at the "shack" or store for light refreshments and beverages. Then head over to the "barn" for barn dances. Music was provided by our local musicians playing accordion, piano, drums (dependent upon who was in Camp). There were always polkas, the Bunny Hop and the evening always ended with Good Night Ladies'."

Long before hosting his own late night television show, "The Zany World of Joey Bavaresco. Joseph Joe" Bavaresco lead teen activities in Camp Meeker. Most memorable was the aquacade spectacular he orchestrated many years prior to the removal of the WPA-dam on Dutch Bill Creek.

St. Rita's was the other women's club. Catholic Church held services there on Sundays. For a quick get away after services teens assembled on the porch. St. Rita's club held weekly Whist games and occasional auctions.

All content from Kiddle encyclopedia articles (including the article images and facts) can be freely used under Attribution-ShareAlike license, unless stated otherwise. Cite this article:
Camp Meeker, California Facts for Kids. Kiddle Encyclopedia.