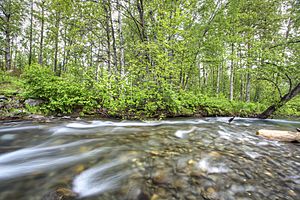 Summertime view of upper Campbell Creek, which passes through the Campbell Tract, a multiple-use area managed by the Bureau of Land Management. 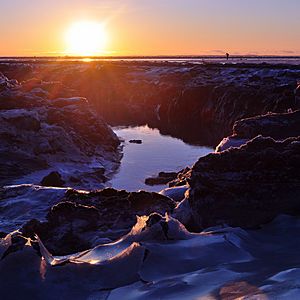 Campbell Creek as it winds through mudflats in between Campbell Lake and its mouth at Turnagain Arm.

Campbell Creek is one of several streams that flow through the city of Anchorage, Alaska. It runs for 21 miles (34 km) from the Chugach Mountains to the Turnagain Arm of Cook Inlet.

The main stem of the creek is formed at the junction of the North and South Forks, which flows in a south-westerly direction through Campbell Lake, before reaching the Turnagain Arm. The watershed of the Campbell Creek includes a number of tributaries, including the Little Campbell Creek, the Lower Campbell Creek, and the Middle Fork.

The creek connects a number of parks, open spaces and lakes to form a green corridor running from east to west through the city. The paved Campbell Creek trail follows the creek for much of its lower course through the areas from Campbell Park to Campbell Lake, over a distance of seven miles.

Before English-speaking settlers arrived in Anchorage, the Dena'ina inhabited the area. They called the creek Qin Cheghitnu or Crying Ridge Creek. The Crying Ridge referred to Tanaina Peak in the Chugach Mountains, in the upper reaches of the creek, which was considered to be a place of bereavement.

The European name of Campbell Creek is a derivative of Point Campbell, where the Knik and Turnagain arms of Cook Inlet meet.

During summer, Campbell Creek is popular for inner tubing and kayaking.

All content from Kiddle encyclopedia articles (including the article images and facts) can be freely used under Attribution-ShareAlike license, unless stated otherwise. Cite this article:
Campbell Creek (Alaska) Facts for Kids. Kiddle Encyclopedia.